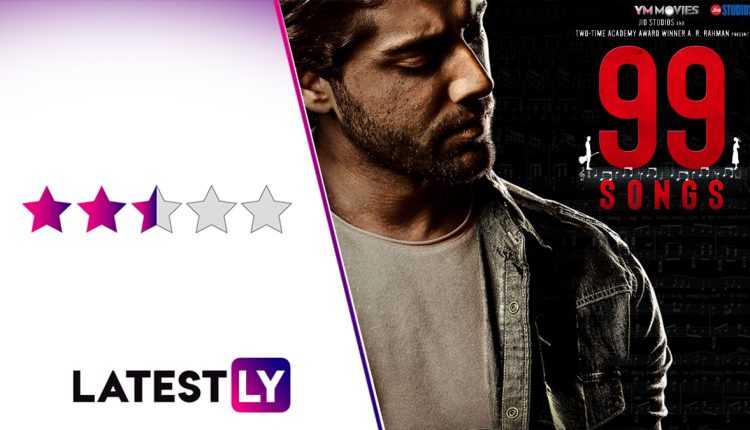 99 Songs Movie Review: Oscar-winner and one of India’s biggest music legends, AR Rahman is turning both producer and writer with 99 Songs. With a fractured release thanks to COVID-19, 99 Songs might not be releasing all over the theatres in India, which is a disappointment, for the film is visually stunning. But more on that later. For Rahman to lend his penmanship and monetary backing to a film, it has to be special, right? 99 Songs: AR Rahman Announces Special Virtual Concert of His Upcoming Musical Movie.

99 Songs, directed by Vishwesh Krishnamoorthy, is a musical love story that has the making of a Broadway musical in terms of how its musical pieces and certain visual structures are brought out. We meet Jay (Ehan Bhat), a music prodigy whose love for notes and bars has surpassed the hatred his father had for his son in learning them.

Jay is in love with Sophie (Edilsy Vargas), a mute but skilled artist and danseuse. Her wealthy father approves of Jay and his musical talents. Strangely, that approval doesn’t go to Jay’s ambitions of being a musician. He challenges Jay to create 100 songs after which he can ask for Sophie’s hand for marriage. Thus begins the tumultuous journey of Jay to create his masterpiece that sees him experience joy, pain, loss and redemption.

Right from the very first frame, 99 Songs bowls you over with its visually striking frames, exquisite use of colours and impressive set designs. It helps that the visuals complement so well with the musical score, a rarity in Indian cinema these days, aided by the lovely camerawork (Tanay Satam, James Cowley) and the frame-cuts (editing by Akshay Mehta and Shreyas Beltangdy). Ah, the benefit of having a man with immense musical skills immersing himself in a film!

And then there is AR Rahman’s score. While I am still a little disappointed that 99 Songs still doesn’t bring the kind of music that had made me adore this legend, his composition here creates a kind of magical fluidity that is just stunning. Just check out the track played during a fight sequence at a basketball court or incredible picturisation of the jazz sequences involving Lisa Ray’s character. The blend of tunes and visuals is so ethereal is that I keep having this feeling if 99 Songs would have worked better as a Broadway musical. Save for one problem.

“Badi interesting kahani hai tumhari“, saying Manisha Koirala’s character to our hero at one point of the film. I wish I could say to AR Rahman the writer and Krishnamoorthy the screenwriter. Jay’s bumpy life story is contrived, cliche-ridden and has nothing new to offer. Even the dark turns that the film takes in the second act or supposedly intriguing backstory of the protagonist (that has nothing novel) doesn’t help in making 99 Songs’ narrative any better and often ends up making it dull. There is also the matter of length – without an interesting screenplay, the runtime of 130 minutes becomes taxing after a point. 99 Songs Movie Review: AR Rahman’s Musical Drama, Starring Ehan Bhat and Edilsy Vargas, Gets Mixed Response From Critics!

The characterisation of the two leads comes across as jarring, especially that of the female lead. Sophie’s muteness also lends to her character having no kind of voice at all when it comes to the two men in her life – her father and her lover. As the film delves more and more into Jay’s frenzied journey, Sophie becomes more of a pretty bystander who is often forgotten, despite being the main motivation for that journey to even begin.

Even Jay, for the matter, gets stuck with some awkward writing. While his love for music is graphed out in a convincing manner, I cannot say the same about his maturing into a better musician towards the latter portions of the film. The story hardly offers the kind of impetus that make us root for his transformation.

The performances are decent enough. For a first-time performer, Ehan Bhat, who reminded me both of Hrithik Roshan and Barun Sobti in his looks and mannerisms, shows amazing confidence, especially in the emotional sequences. Let’s hope that 99 Songs opens more doors for him to cement his place in Bollywood. Edilsy Vargas’ beauty seamlessly merges with the pretty canvas offered by the film, but her performance is hampered by the writing around her character. Tenzin Dalha of Axone fame leaves a good impression as Jay’s BFF.

– Should Have Been Shorter

99 Songs is the kind of film that makes for a good big-screen impression with the magical blend of Rahman’s score and visuals. If that blend was backed with a more imaginative screenplay, then this would have a movie that could have been talked about for years!

(The above story first appeared on Scoop Buddy on Apr 17, 2021 12:25 AM IST. For more news and updates on politics, world, sports, entertainment and lifestyle, log on to our website scoopbuddy.com).