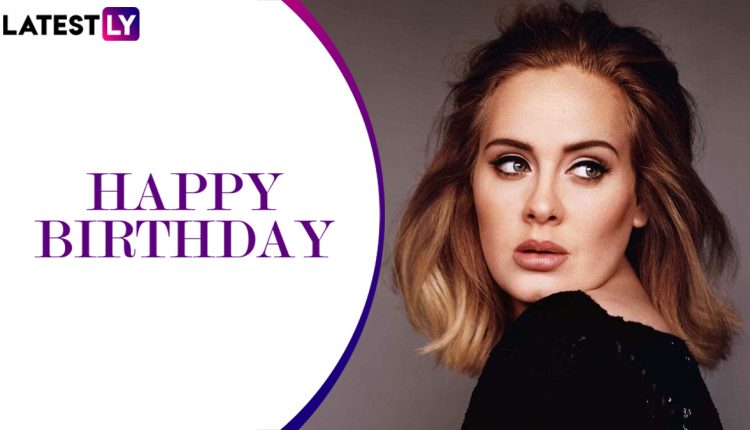 Adele Birthday Special: 5 of Her Most Empowering Moments Over the Last Few Years

Adele is one of those singers whose voice is truely gifted. There are only a few atirsts who are able to strike a chord with their audiences the way British singer-songwriter, Adele does. The singer who rose to fame in 2008 with her debut album 19, has been entertaining her fans for a long time now, and has been creating some really amazing music.  In 2012, Adele peaked in her career with the second album that won her all the major honours in the music industry including Grammy Awards, Brit Awards, American Music Awards and more. She has been only progressing ever since, and had even landed the opportunity of singing a song for the Bond film, Skyfall. Adele Might Unveil Heartbreak Album by End of 2019.

Adele has a very unique relationship with her music. All her albums are named in numerical and the reason behind it is that they represent the age when she wrote and composed them. This is something quite interesting just like her songs. Be it her romantic ballads or the break-up tracks, Adele is known for punching in some high-level emotions in her tracks, and her fans are always looking forward to listen to her news songs.

The singer in turning 33 today, so we decided to looks at some other iconic moments that Adele stunned her fans with. Here are 5 memorable moments of the “Rolling in the Deep” singer.

Adele On The Cover Of UK Vogue

In 2011, the singer made it on the cover of UK Vogue. This was a pretty huge deal as many only dream of appearing on the cover of this prestigious magazine. Adele featured in an English Woman edition of the magazine which celebrated the modern English woman, including Amy Childs.

Back in 2012, James Corden had cut Adele off from her acceptance speech at The Brit Awards. He wanted Blur to take the stage. The singer did not refrian from giving it back to him right there and then as she threw him the middle finger!

Who would have known that one day Adele willeven conquer the Star Wars. Adele released the video for her comeback track, Hello on October 23rd, 2015. It was the same time when the much-awaited trailer for Star Wars: The Force Awakens was coming out. While many thought that it would be a stiff competition for Adele, she got an average of 1.6million views per hour against Star Wars’ 1.2million.

Her Performance At the Royal Albert Hall

Someone Like You is a special song for Adele. She performed this song during her performance at the Royal Albert Hall, and had everyone in tears including herself. The guy that [album 21] is about changed my life, and we were so in love and we had so much fun. It was f—— brilliant, our time together,” she said during the performance. Adele Lost 22 Kilos With Sirtfood Diet! Here’s Everything About the Diet and How Effective Is It for Long-Term Weight Loss.

While Adele had said, “I have never been insecure, ever, about how I look, about what I want to do with myself,” during an interview with Daily Mail in 2009, her transformation has been nothing less that an inspiration. She lost a huge amount of weight in 2012 before her son was born that October, and stunned everyone with her. She lost a good 22 Kgs in 2020 as well. She has been working on herself ever since, and her transformation is truly commendable.

Well, Adele will continue to stun us and make history, and to be honest, her fans are all ready to witness the greatness. Meanwhile, join us in wishing the singer a very happy birthday.

(The above story first appeared on Scoop Buddy on May 05, 2021 09:10 AM IST. For more news and updates on politics, world, sports, entertainment and lifestyle, log on to our website scoopbuddy.com).