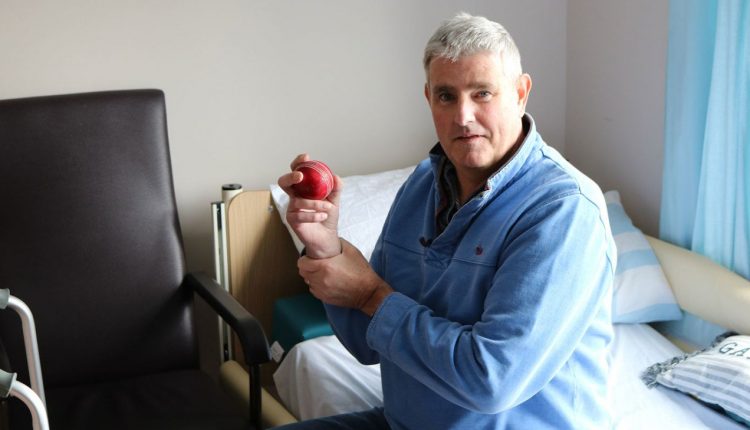 The family of Alan Igglesden, the former Kent and England seamer, has released a film to raise funds and awareness for The Brain Tumour Charity, 22 years after he was diagnosed with an inoperable growth that has dominated his life since 1999.

Igglesden, who was a mainstay of Kent’s bowling line-up between 1986 and 1998, claimed 693 wickets across first-class and List A cricket, eight of which came during his seven appearances for England, including three Tests between 1989 and 1994.

In 1999, one year after making his final appearance at Canterbury and at just 34 years of age, Igglesden suffered an epileptic fit whilst playing minor counties cricket for Berkshire. An MRI scan revealed a tumour the size of a junior cricket ball, and he would never play professional cricket again.

In the years since his diagnosis, Igglesden has been receiving pioneering treatment, which has shrunk the tumour to the size of a golf ball, and for a time he was able to teach sport at schools in both Kent and Apperley Bridge near Leeds, close to where he now lives with his wife Liz, and seven-year old daughter Beth.

He suffered setbacks in his recovery in 2009, and again in 2015 and 2016, when the tumour showed signs of resuming its growth. But the family’s life was turned upside down in 2018, when he suffered the first of two major strokes in the space of three years, which have left him increasingly unable to speak or walk.

“You just don’t know when this stuff is going to happen,” said Liz Igglesden, speaking to the Professional Cricketers’ Trust. “None of this is to do with lifestyle, he got a brain tumour even though he never drank, smoked or drove badly. He got a brain tumour because he got dealt a rubbish hand, then he had a stroke, then another stroke. We’re waiting for lightning to strike twice now because he’s been that unlucky.

“It sounds like every insurance company advert ever, but to have two massive strokes when all you’ve been preparing for is a brain tumour, it just sweeps your life away in seconds.

“He’d be stuck in his room all day, every day. When he first came back from hospital and was quite immobile, he just didn’t leave his room.

“That arm that everyone used to cheer when it bowled, to now not be able to raise it or hold a drink, what does that do to your head?”

Igglesden has retained his optimistic outlook on life despite his setbacks, and has used his story to raise over £300,000 for The Brain Tumour Charity, the largest dedicated fundraiser of research into brain tumours globally, and an organisation of which he is a patron.

And though the impact of his strokes mean he is now receiving end-of-life care, he has committed to undertaking the “5k May” challenge, with the support of his family, to raise further funds for the Professional Cricketers’ Trust, so that it can help other players in the future in the same way that it has helped him.

“When everything is really hard, the Professional Cricketers’ Trust just makes everything more bearable and their support and sense of family and help just means we can carry on,” Liz added. “We’re really, really grateful for everything.”

For more information on Iggy’s 5k May challenge and how you can support the players’ charity, visit his #5ferIggy JustGiving page.