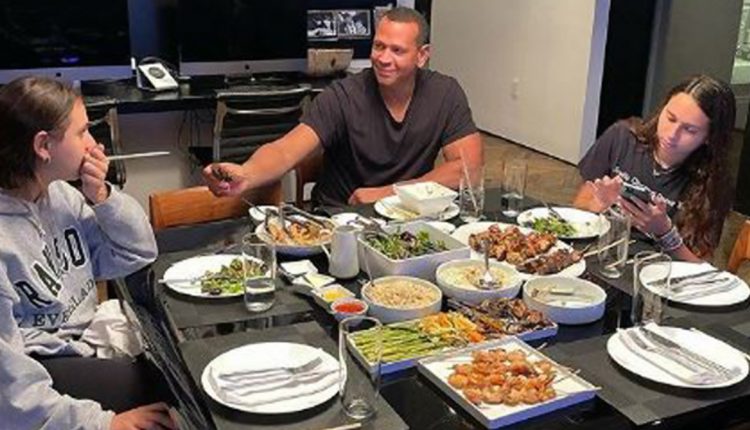 American pop star Jennifer Lopez’s ex-boyfriend Alex Rodriguez is spending time with his family following his breakup from JLo. According to E!News, the former Yankees star took to Instagram to share a photo from his daddy dinner date with daughters 16-year-old Natasha and 13-year-old and Ella. “Din din with my girls!” he captioned the pic, which shows several empty seats at the dinner table that may have previously been occupied by Lopez and her 13-year-old twins, Max and Emme. Alex Rodriguez Is Upset and Shocked Over Ex-Fiance Jennifer Lopez and Ben Affleck’s Reunion.

“Makes me sad were the other plate settings for jlo n the coconuts,” one fan commented on the snap. Another wrote, “One is missing!” Per E!News, the 45-year-old former baseball star and Lopez officially called off their engagement in April after months of speculation about their relationship status. The stars said in a joint statement to the outlet at the time,  “We have realized we are better as friends and look forward to remaining so. We will continue to work together and support each other on our shared businesses and projects.” Ben Affleck and Jennifer Lopez Spark Rumours of Hanging Out After Alex Rodriguez Split.

Rodriguez and Lopez, whose families spent a great deal of time together throughout their four-year relationship, noted they “wish the best for each other and one another’s children.” The duo also added, “Out of respect for them, the only other comment we have is to say is thank you to everyone who has sent kind words and support.” In recent weeks, the ‘On The Floor’ songstress has been spending time with her ex, Ben Affleck. The stars, who called off their engagement in 2004, recently enjoyed a week-long getaway together in Montana. “They were alone. Just the two of them,” a source told E! News. ”

Here’s How to Successfully Bring Your Dream Home to Life, According to Marc Menowitz

Juventus vs Inter Milan Live Streaming Online & Match Time in IST: How To Get Free Live Telecast of Serie A 2020–21 on TV & Football Score Updates in India?