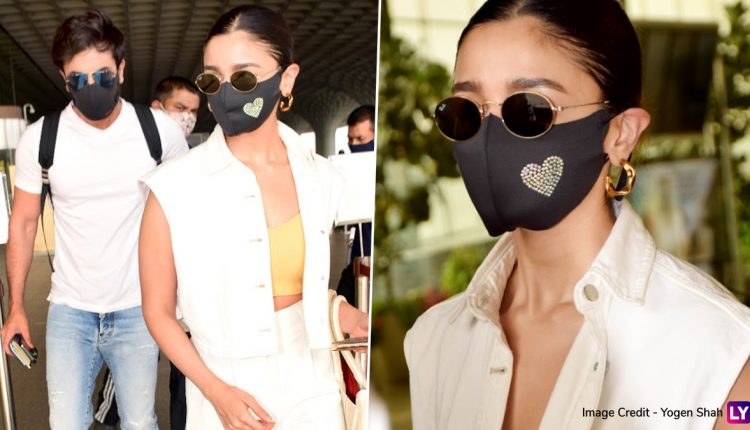 Alia Bhatt Loves Wearing Beau Ranbir Kapoor and Her Lucky Number 8 on Her Ring Finger and We Have Proof!

Ranbir Kapoor and Alia Bhatt are all over the internet. Well, the reason behind the same is that the lovebirds who’ve jetted off to the Maldives amid the pandemic have irked the netizens. However, that’s an old story, as we’ve come across a picture of the Gangubai Kathaiwadi actress wherein she can be seen flaunting her gold ring at the airport. But that’s not the only ‘t’ as the ring has beau Ranbir Kapoor connection. Yep, you read that right! Ranbir Kapoor and Alia Bhatt Take a Vacay Together; Netizens Slam the Lovebirds for Taking a Maldives Trip in Midst of Pandemic.

Coming to the point, if you take a closer look at Bhatt’s photo from the airport runway, her ring has the number 8 carved on it. Well, we all know what that means right? Just in case, you don’t, let us tell you how 8 is a lucky number for Ranbir as well as Alia. And so are the two engaged already? Whatsoever, this is so cute. We are sure that the pair love each other to the next level. Earlier, the same accessory was seen on her index finger on Valentine’s Day 2021. Alia Bhatt’s Sequinned Mini Dress From Her 28th Birthday Bash Costs Rs 2.72 Lakh (View Pics).

Ranbir and Alia have been seeing each other for quite some time now. The couple will be seen for the first time in Brahmastra. Helmed by Ayan Mukerji, the film also stars Amitabh Bachchan, Mouni Roy and Akkineni Nagarjuna in pivotal roles.

Also, earlier, this year in an interview with Rajeev Masand, Ranbir Kapoor had confirmed that he and his girlfriend Alia Bhatt were to get married in 2020, but COVID-19 ruined their plans. “It would’ve been sealed had the pandemic not hit our lives. I don’t want to jinx it by saying anything. I want to tick-mark that goal very soon in my life,” he had said. Stay safe, wear a mask!

(The above story first appeared on Scoop Buddy on Apr 19, 2021 09:35 PM IST. For more news and updates on politics, world, sports, entertainment and lifestyle, log on to our website scoopbuddy.com).

US President Joe Biden Announces That Every American Is Eligible To Recieve COVID-19 Vaccine, Urges Citizens To Get Vaccinated (Watch Video)

Aquaman 2: THIS Game of Thrones Actor is Reportedly Joining Jason Momoa in the Sequel Of His Superhero Movie