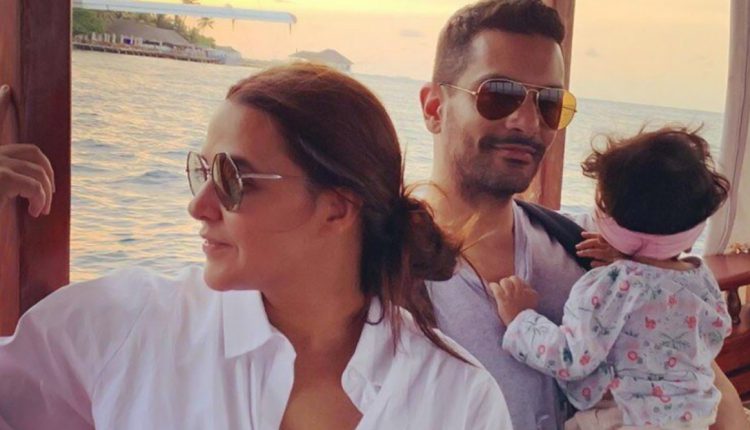 Bollywood couple Angad Bedi and Neha Dhupia often post pictures of family outings on social media, but so far they have ensured that their two-year-old daughter Mehr’s face has never been exposed for th camera. Angad says this is their efforts as parents to protect the child from media scrutiny. However, when she grows up, she is free to be in the limelight if she wants to. Angad Bedi Says Daughter Mehr Changed His Perspective towards Life.

“I get many requests from fans to see her picture and I feel that everyone wants to see her. She is her own person. She is two right now and may be when she is five or six years old, she will ask us why we are not putting her picture out. That can be asked to us. We just want to secure her and if in future she is comfortable with having her imagery out, we are no one to question that. Till the time she is okay with it, we would like to protect her,” Angad tells IANS. Angad Bedi Can’t Keep Calm As Daughter Mehr Gives Him a Helping Hand to Walk Post His Knee Surgery (Watch Video)

He continues: “There is a situation where pictures get tracked too much and get impressionable. There is too much pressure and we want to keep her away from that but in the coming years she is okay with that pressure, we are not going to challenge that too.”

The actor, who has been part of films such as “Pink”, “Soorma” and “The Zoya Factor”, adds: “I think you have to protect your family, which I try and do to the best of my ability but we have to also understand that we are part of a celebrated profession, which is going to be bound by media scrutiny. I feel if we are okay with positivity, we should also be okay with this aspect too, which at a lot of level Neha and I are. We are just trying to protect her till the time she builds her own understanding. The day she starts understanding, we will not have a problem.”

With the advent of smartphones, many fans follow their idols for selfies. Actors happily oblige at times, but they also leave without entertaining fans at times. Angad doesn’t support this behaviour. “Our profession is to be seen. We work hard to be seen and when people (other actors) start getting noticed, they wear their shades and hide their faces. You should be glad that people want to take your picture and you are a person people want to see. You are in a profession where you have to be seen,” he says.

“My point is when you work so hard to get recognised through your work. Lot of people don’t get pictures or sign autographs and complain that it’s too crowded. You have worked too hard all the years to gather this crowd and when it is finally happening , then you are complaining. If people are investing their time to see you, then you should be happy investing in them because you have worked all your life to get invested in,” the actor shares.

(The above story first appeared on Scoop Buddy on Apr 17, 2021 12:33 PM IST. For more news and updates on politics, world, sports, entertainment and lifestyle, log on to our website scoopbuddy.com).