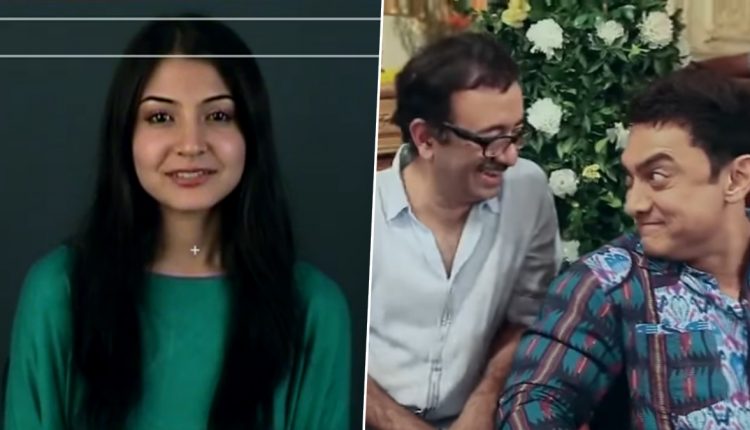 Anushka Sharma’s audition tape for 3 Idiots has resurfaced and is going viral again. Back in 2014, the same video had made many amused that the actress had auditioned for the lead role in the film. The opportunity however went to Kareena Kapoor Khan instead. Now, if everyone is wondering why Anushka wasn’t selected, an old video of PK‘s making has all the answers. Called the PK Funnies, this video has Anushka telling everyone about her audition including Hirani and Aamir Khan. The director didn’t even know she auditioned for 3 Idiots in the first place. Aamir Khan’s 3 Idiots, Mohanlal’s Drishyam, Shah Rukh Khan’s Swades – 10 Indian Movies That Actually Make It to IMDb’s Top 250 Movies (Scoop Buddy Exclusive)

Hirani can be seen initially dismissing the fact that Anushka ever auditioned for 3 Idiots. Later, Anushka reveals that she made Aamir and Hirani watch her tape. Both of them were shocked to see it. Aamir even praised her for crying without glycerine. The shock on Hirani’s face was quite funny to watch.  Virat Kohli Opens Up About Raising Vamika With Anushka Sharma, Calls It a Life-Changing Experience

Anushka made it to PK and if that wasn’t enough, her character in Sanju was apparently modeled on Hirani and writer Abhijat Joshi. Sharma played a biographer in the film.

(The above story first appeared on Scoop Buddy on Apr 29, 2021 06:12 PM IST. For more news and updates on politics, world, sports, entertainment and lifestyle, log on to our website scoopbuddy.com).