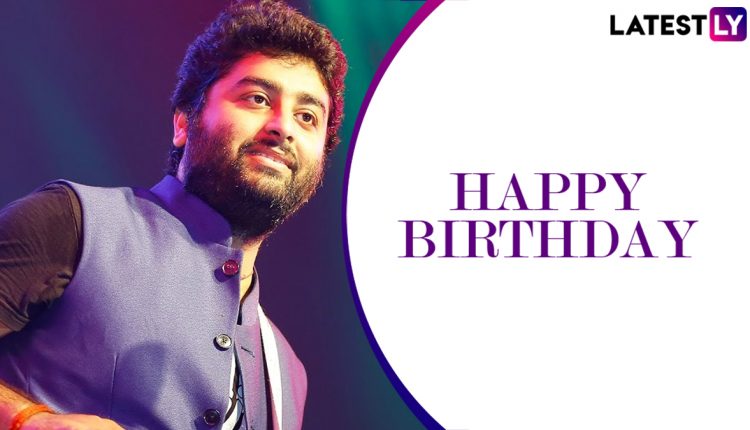 Arijit Singh Birthday: Aayat, Phir Le Aaya Dil, Khul Kabhi – 7 Underrated Songs of the Singer That Need To Be on Your Playlist ASAP!

Arijit Singh is one of the most sought after singers we have in showbiz. His songs are magical as they touch your soul and also calm you down. It’s a rare talent to have a voice that’s just out of the world. The former Fame Gurukul contestant could not win the show, but he has undoubtedly achieved heights in the music industry. Channa Mereya, Tum Hi Ho, Zaalima and many more are some popular tracks of the singer. However, on the occasion of his birthday today (April 25), we would like to list some underrated melodies of Arijit that are a pure gem. Pagglait Title Track: Sanya Malhotra Is Crazy And Wild In This Funky Arijit Singh Track (Watch Video).

Well, If you happen to be a fan of the singer, these not-so-famous songs of his will make you love him more. And if you’re not his fan – we bet you’ll fall for his soothing voice after checking out the list below. So, without further ado, let’s check some underrated songs of Arijit that deserve to be part of your playlist ASAP. Arijit Singh Warns Against Using His Vocals Without Approval (View Post).

From the movie Bajirao Mastani, this beautiful song is for the ones who are into slow and meaningful tracks. Featuring Ranveer Singh and Deepika Padukone, this romantic melody transports you to another world.

Arijit Singh is known to churn sad and romantic melodies. However, not at all his songs needs to be from that genre, right? This one from Kangana Ranaut’s film Simran is a happy track that’s quite pleasing.

Before Bajirao Mastani, Arijit had already crooned his best for Sanjay Leela Bhansali with Laal Ishq. From the movie Goliyon Ki Rasleela Ram-Leela, the track is beyond words and you need to listen to it to like it.

Ranbir Kapoor, Ileana D’Dcruz and Priyanka Chopra-starred Barfi’s full album is superhit. However, Phir Le Aaya Dil is the most underrated track from the list and so it definitely deserves a mention here for simply being the best. Listen!

This song features no A-listers and that’s one of the reasons why this fab melody didn’t get the appreciation it should have. Khamoshiyan from the film of the same name is a tune sung by Arijit that’s fantastic.

Shahid Kapoor and Shraddha Kapoor’s romance added the right amount of spark to this song. This one from the movie Haider takes you on a passionate ride amidst the snow-clad mountains and you’ll surely be in awe.

Many don’t know but there’s Yaariyan, the Arijit Singh way and it’s just ah-mazing. Listen to it, and you would be thanking us later.

That’s it, guys! These are some of the handpicked underrated songs of Arijit Singh that needs recognition and love. The singer turns 34 today (April 25) and we wish him lots of luck in future. Happy Birthday, Arijit. Stay tuned!

(The above story first appeared on Scoop Buddy on Apr 25, 2021 08:10 AM IST. For more news and updates on politics, world, sports, entertainment and lifestyle, log on to our website scoopbuddy.com).