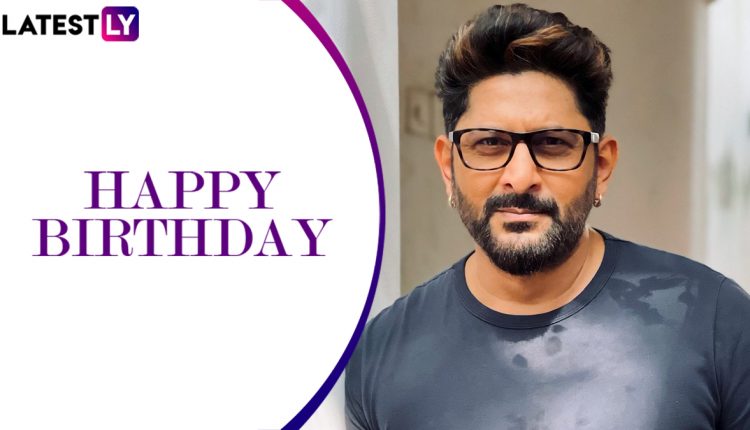 Arshad Warsi Birthday: Five Comic Scenes Of The Golmaal Actor To Put A Smile On Your Face During These Stressful Times (Watch Video)

Arshad Warsi is a multi-talented artist who has only received his dues sporadically. He may have started his career as a choreographer and even designed the moves of Anil Kapoor and Sridevi in the title track of Roop Ki Rani Choron Ka Raja. But today, he is one of the underrated actors of the industry who got an endorsement from none other than Naseeruddin Shah himself. While Warsi has done several serious roles, it is his comic flair that helped him become a popular face. Be it the staunchly loyal goon Circuit or a ditzy Madhav or snappy Jolly, this actor has managed to invade every realm of the comedy universe and emerged victoriously. LOL- Hasse Toh Phasse: Amazon Prime Video Announces New Comedy Series Featuring Arshad Warsi, Boman Irani, Sunil Grover Among Others (Watch Video)

So on his birthday today, we have decided to list our five outstanding comedy scenes of Arshad Warsi. Why? In these grim times, reasons to smile have dwindled considerably and we think these videos can definitely give us a moment of relief. Arshad Warsi Remembers How Exactly a Year Ago This Was Our Last Normal Week Before COVID-19 Lockdown

This is our personal favourite Circuit scene from the entire Munnabhai series. Although it’s borderline racist, the way he enacts it definitely makes everyone smile.

Circuit continues to be super-funny and the biggest cheerleader for Munna even when he hallucinates about Mahatma Gandhi. You want a friend like that who can crack you up all the time.

Not many have watched this film but this is one of those Rohit Shetty films that deserve a repeat watch. Not just for Arshad Warsi but for the late Irrfan Khan too.

Although every scene in this film deserves a mention here, we picked the ones in the trailer because they are extremely funny. The biggest asset of Warsi is his expressions are convincing and extremely transparent.

Again, there are a lot of scenes in this series that should be here but since we couldn’t decide, we zeroed in on this.

For someone who didn’t want to act because he feared failures, Arshad Warsi has charted his career perfectly dabbling with genres.

(The above story first appeared on Scoop Buddy on Apr 19, 2021 09:10 AM IST. For more news and updates on politics, world, sports, entertainment and lifestyle, log on to our website scoopbuddy.com).