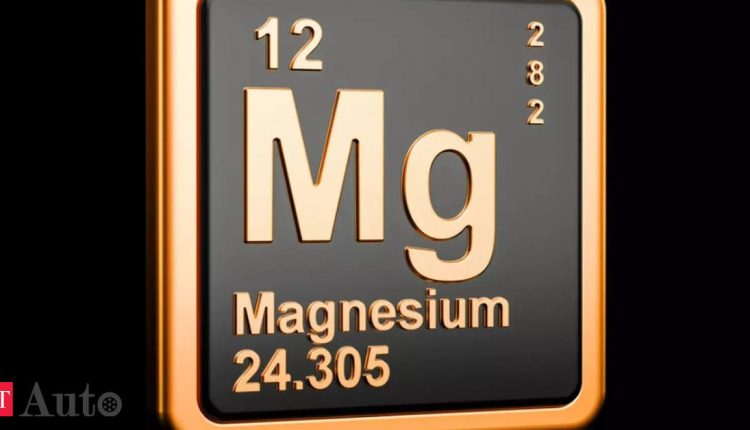 After Chinese authorities cut down on magnesium production, auto manufacturers across the world are ruing dependence on Beijing for supplies as the price of the metal has spiked.

Rurika Imahashi, writing in Nikkei Asia said that China imposed electricity cuts to meet environmental targets due to which the operations were suspended in some areas of Shaanxi Province, home to 60 per cent of China’s magnesium output.

China accounts for 80 per cent of the world’s production and the manufacturers are facing difficulty after the price of magnesium spiked.

The metal is an essential raw material for aluminium alloys, which are used in car parts such as gearboxes, steering columns and fuel tank covers. It is also widely used in steel production to help remove sulphur.

Prices of coal and ferrosilicon, an alloy containing iron and other substances that are also used to produce magnesium, were soaring at the same time, driving magnesium prices to a record USD 10,000 per ton before power was restored and Beijing allowed more coal mining, reported Nikkei Asia.

For buyers in Japan, whose users of magnesium include carmakers and steel producers, that equated to a peak of 1,050 yen (around USD 9) per kilogram, said Rurika.

The last time magnesium prices surged was in 2008 when Beijing imposed restrictions on the industry in the hopes of having a blue sky during the Olympic Games. The price rose to USD 6,500 per ton, a record high at that time, reported Nikkei Asia.

The price shock has left manufacturers and traders scrambling. China has had an advantage in producing magnesium as it has cheaper coal, electricity and ferrosilicon, said a representative from Hanwa Co, a Tokyo-based metal trading company.

But “customers are now aware of China risk more than ever and we are facing increasing demand from them to purchase more magnesium from other countries”, said Rurika.

The rest of the global magnesium supply comes from Turkey, Israel, the US and Brazil. The representative is in talks with suppliers in these countries but the competition is intense among buyers from across the world.

The southwestern province of Guizhou on Oct. 21 ordered all five of its aluminium smelters to reduce power usage and shut capacity, consultancy MySteel reported, putting the annual operating capacity affected at 1.3 million tonnes.

Four minerals – helium, potash, rhenium, and strontium – have been dropped. The United States is the world’s leading producer and net exporter of helium, while import dependency for the other three is mitigated by “low disruption potential”. Uranium was also dropped after being reclassified as a “mineral fuel”.

India likely to utilise only half of vaccine produced in December, Health News, ET HealthWorld