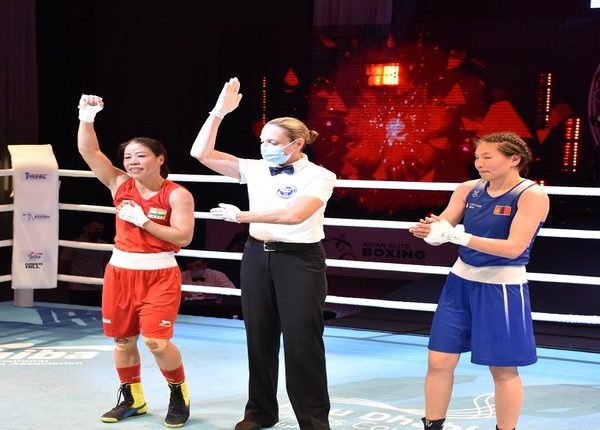 Dubai, May 27: Ace India boxer Mary Kom made her way into the final after defeating Lutsaikhan Altantsetseg in the women’s 51kg semi-final at the 2021 ASBC Asian Boxing Championships in Dubai on Thursday. The seasoned campaigner Mary Kom made a defensive start and took her time in the first round. The six-time world champion made the Mongolian opponent work hard and looked in good touch in the next round as she landed timely and powerful punches that put pressure on Altantsetseg.

Mary Kom, who was out of action and playing only second event since the lockdown after having recovered from dengue, kept her calm and used all her experience to take charge of the game and completed a 4-1 win.

Having won six medals already in the Asian Championships, including five golds, Mary Kom will be up against Kazakhstan’s two-time world champion Nazym Kyzaibay who entered the final beating Sri Lanka Nadeeka Pushpakumari with the referee stopping contest (RSC) after the first round. Shiva Thapa Secures His 5th Successive Medal at Asian Boxing Championships 2021, Enters Semis.

Earlier in the 48kg last-4 match, Monika gave her all and fought hard but fell short against the second-seeded Kazakh boxer Alua Balkibekova as she suffered a 5-0 defeat and secured bronze medal for the country.

The International Boxing Association, AIBA has allocated USD 4,00,000 prize money for the prestigious event which is jointly hosted by the Boxing Federation of India (BFI) and UAE Boxing Federation. The gold medallists of men’s and women’s categories will be awarded with USD 10,000 while both the silver and bronze medal winners will take home USD 5,000 and 2,500 respectively.

With 15 medals confirmed in the ongoing event, the Indian contingent achieved their highest medal haul, bettering previous best of 13 from the 2019 edition in Bangkok where they finished third with two gold, four silver and seven bronze medals.

The ongoing event has witnessed the presence of 150 boxers from 17 countries including strong boxing nations such as India, Uzbekistan, Philippines and Kazakhstan.

Shiva Thapa, who has secured a record fifth successive medal at the Asian Championships, will take on top-seeded Bakhodur Usmonov of Tajikistan.

Panghal will square off against Kazakh boxer Saken Bibossinov, whom he beat in the 2019 World Championships semi-finals while Vikas will face challenge from defending champion Bobo Usmon Baturov of Uzbekistan.

Huma Qureshi: Moving From Delhi to Mumbai Has Been a Turning Point of My Life

One year on, vaccines still most acceptable weapon against Covid-19, Health News,…