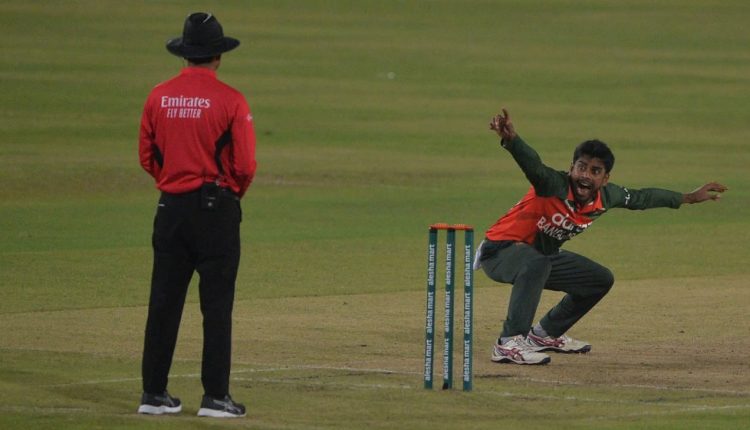 ‘I planned so that the batsmen couldn’t dominate me, even if I didn’t take wickets,’ says Bangladesh offspinner

Mehidy Hasan Miraz believes that his appetite to play in all three formats is the reason for his climb up to No. 2 in the ICC’s rankings for bowlers in ODIs. He is only the third Bangladeshi to break into the top-two of these rankings, the first in ten years.

Miraz broke into the top ten in January this year after he took seven wickets against West Indies. After his exploits against Sri Lanka over the week, he rose from No. 4 to No 2, just 12 rating points behind the leader Trent Boult.

“I was a Test specialist when I started but I always wanted to play all the formats successfully,” Miraz said. “I wanted to contribute to the team when I started playing ODIs. I focused on the economy rate, because that would keep me in the team and allow me to get breakthroughs. I understand that batsmen are in a rush to score runs in ODIs. I was more focused on the small things, what improvement will help the team, help me be in the team.”

Miraz said the turning point in his career came in three years ago, on a tour of the Caribbean, when he took only three wickets but had an economy rate of 4.06. He then took six wickets in the 2019 World Cup in conditions that were far from ideal for a fingerspinner.

“I became an ODI regular from the 2018 away series in West Indies. The 2019 World Cup gave me a lot of confidence, particularly in a country where there wasn’t any spin tracks. I planned so that the batsmen couldn’t dominate me, even if I didn’t take wickets. Small things make all the difference. It worked in a few matches – against South Africa, New Zealand and England.”

Miraz came under scrutiny when he took just three wickets in the one-off Test against Afghanistan in 2019, and had unflattering figures of 1-125 against India in the Indore Test that same year. He lost his place for the second Test in Kolkata, but later came on as a concussion substitute. Through those bad days though, he still had the unflinching support of his team-mates.

“I never thought I could reach No. 2 in the ODI rankings, so I am feeling great,” Miraz said. “I want to thank my team-mates and team management, who supported me a lot. Everyone in the team is happy for me, which is really pleasing for me.

“I really love it when my team-mates back me up particularly when I am down. I think it is a massive thing for a player. I don’t think I would have come this far if my team-mates didn’t back me in my bad days,” he said.

Miraz’s rise in the rankings is also proof that there is talent even beyond the big four in Bangladesh cricket – Tamim Iqbal, Shakib Al Hasan, Mushfiqur Rahim and Mahmudullah – who have again come to the fore in the ODIs against Sri Lanka. Miraz said that the lesser experienced players should take lessons from how these players conduct themselves.

“There was a time when we used to idolise foreign cricketers but now world-class cricketers are in front of our eyes. We are playing together. We didn’t bat well in the last two matches, but the way Mushfiq bhai and [Mahmudullah] Riyad bhai put together those partnerships, it is worth watching.

“Shakib bhai‘s World Cup performance, how Tamim bhai became a top opening batsman and how [Mominul Haque] Sourav bhai became successful in Tests – these are things we can definitely learn from,” he said.