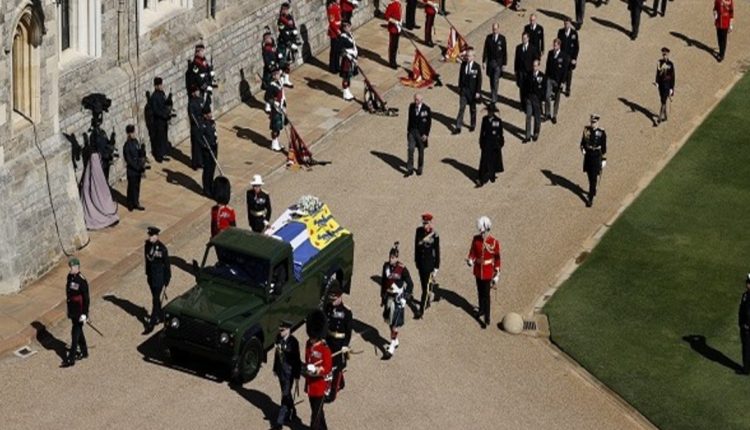 London, April 17: People across Britain observed one minute of silence in honor of the late Prince Philip just before his royal ceremonial funeral got under way inside St. George’s Chapel at Windsor Castle on Saturday.

Philip, who was consort to Queen Elizabeth II, died on April 9, just two months shy of his 100th birthday.

According to The New York Times, the ceremony for Prince Philip, who died last week at age 99, was highly unusual — in part because coronavirus restrictions meant that the ceremony had to be scaled back, but also because it followed a very public airing of a family rift.

Members of the royal family — Philip’s four children, Charles, Anne, Andrew and Edward, and some of his grandchildren, including William and Harry — walked in a somber procession behind his coffin as it was driven to the chapel.

As is custom, no family members delivered a eulogy, but the David Conner, Dean of Windsor, who conducted the funeral service, spoke of “the many ways in which his long life has been a blessing to us,” The New York Times reported. Prince Philip’s Funeral Live Streaming Date and Time: Here’s Where and How to Watch HRH Duke of Edinburgh’s Final Rites From St George’s Chapel at the Windsor Castle.

“We have been inspired by his unwavering loyalty to our queen, by his service to the nation and the Commonwealth, by his courage, fortitude and faith,” he said, adding that “Our lives have been enriched through the challenges that he has set us, the encouragement that he has given us, his kindness, humor and humanity.”

In view of COVID-19 pandemic, the queen and select family members were seen wearing masks and they were seated six feet apart in the chapel.