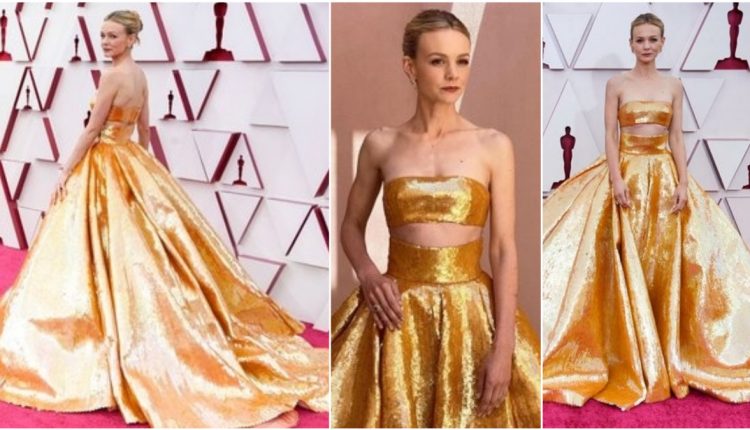 Washington, April 26: British actor Carey Mulligan, who holds a Best Actress nomination at the 2021 Oscars for her role in Promising Young Women, arrived at the ceremony dressed as a modern-day princess clad in a Valentino crop top and skirt.

Mulligan walked down the red carpet, arm-in-arm with husband Marcus Mumford, who kept it classic in a black tuxedo and bow tie. The night marked a rare red-carpet appearance for the couple, who were married in 2012 but are not often seen together in public. One notable exception to this being when he crashed her Saturday Night Monologue back in early April, joking that he was hoping she could get him in as the night’s musical act.

Before the ceremony, Mulligan’s makeup artist Georgie Eisdell had shared a behind-the-scenes video and photo of the actor getting glam with the caption, “Making magic.”

She is up against Andra Day for The United States Vs. Billie Holiday, Vanessa Kirby for Pieces of a Woman, Viola Davis for Ma Rainey’s Black Bottom, and Frances McDormand for Nomadland.

The movie which is a provocative #MeToo-era revenge thriller revolves around Cassie (Mulligan), a med school dropout who experiences a personal tragedy that moves her to exact vengeance against rapists, misogynist men, and those who protect them.

The 35-year-old actor told People magazine in December 2020 that “It’s not about a sort of goodie and baddie situation. I like the fact that the film makes us kind of reexamine, ‘How have we all been complicit in this?’ There’s so much to unpack about the way people talk about consent.”

Mulligan admitted to being scared of the role initially and said her reaction was a sign she had to take it on. Oscars 2021 Full Winners List: From Nomadland to Soul to Sound of Metal, Check Out the Big Victors of the 93rd Academy Awards.