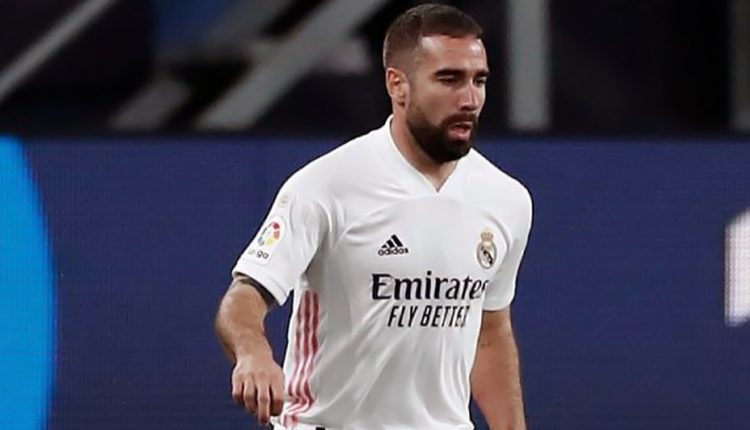 Real Madrid have suffered yet another injury blow as star defender Dani Carvajal is set to miss the Champions League clash against Chelsea after picking up an injury in the reverse tie earlier this week. The Spanish full-back is set to spend another lengthy spell on the sidelines with several reports suggesting that the full-back’s season might have come to an end due to the new muscular issue. Fede Valverde To Miss UCL 2020-21 Clash After Positive Coronavirus Diagnosis.

Dani Carvajal was forced out of the first leg of their Champions League semi-final with Chelsea after 77 minutes. As per an official statement from Real Madrid, the Spanish defender has picked up a hamstring injury to his right leg and further evaluation will determine his availability.

This is the 29-year-old’s fifth setback since September and his fourth of muscular variety. The fullback had just returned from an injury ahead of the clash with Chelsea but the recent issue might have brought his season to a premature conclusion.

The defender has been one of the ever-present players for Real Madrid in recent years but has been plagued with injuries this season. Ligament damage ruled him out for eight games in October, while muscle problems in November and January saw him miss a further 10 fixtures. Hamstring issues have become of greater concern in recent months, with Carvajal sitting out 12 matches between mid-February and April 20.

Dani Carvajal becomes the latest casualty in the Real Madrid team set to miss the Chelsea game through injury. Fede Valverde is likely to be unavailable for the UCL clash due to his COVID-19 diagnosis while there are also concerns over the fitness of captain Sergio Ramos along with Lucas Vasquez, who has been ruled out for the remainder of the season.

(The above story first appeared on Scoop Buddy on Apr 29, 2021 07:38 PM IST. For more news and updates on politics, world, sports, entertainment and lifestyle, log on to our website scoopbuddy.com).