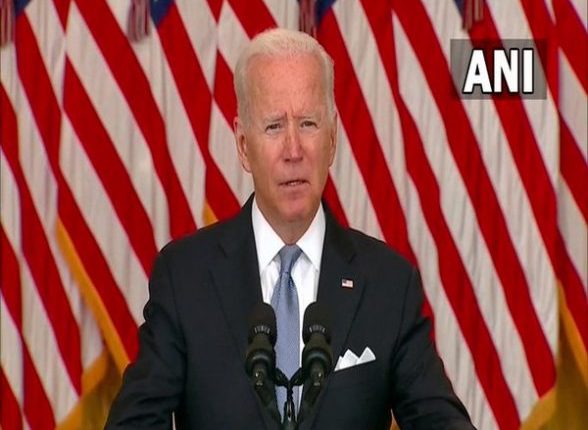 Washington, August 17: Staunchly defending his decision on troop pull-out, US President Joe Biden on Monday referred to China and Russia and said “our true strategic competitors” would love nothing more than America funnelling billions of dollars in stabilizing Afghanistan indefinitely.

“Our true strategic competitors China and Russia would love nothing more than the United States to continue to funnel billions of dollars in resources and attention in stabilizing Afghanistan indefinitely,” Biden said in a nationwide address.

In his first remarks since the Afghan government collapsed and Kabul fell to the Taliban, Biden said he stood by his decision to end the longest war in the United States history by withdrawing troops from Afghanistan.

The remarks came after US Secretary of State Antony Blinken discussed Afghanistan with the foreign ministers of Russia and China.

Taliban entered Kabul early on Sunday and took control of the presidential palace. Thousands of people rushed to the Kabul airport to leave the country.

Several videos surfaced showing hundreds of Afghans desperately running after military planes as they ferried Americans to safety out of the country’s capital.

“The choice I had to make as your president was either to follow through on the agreement to drawdown our forces or escalating the conflict and sending thousands more American troops back into combat and lurching into the third decade of conflict. I stand squarely behind my decision,” Biden said.

He blamed the fall of the Afghan regime on the failure of the country’s military and political leaders.

“Afghanistan political leaders gave up and fled the country,” he said, accusing the military of laying down their arms after two decades of US training and hundreds of billions of dollars in equipment and resources. “If anything, the developments of the past week reinforce that ending US military involvement in Afghanistan now was the right decision.”

“American troops cannot and should not be fighting in a war and dying in a war that Afghan forces are not willing to fight for themselves. We spent over a trillion dollars. We trained and equipped an Afghan military force of some 300,000 strong — incredibly well equipped — a force larger in size than the militaries of many of our NATO allies.

“We gave them every tool they could need. We paid their salaries, provided for the maintenance of their air force — something the Taliban doesn’t have.

Taliban does not have an air force. We provided close air support.We gave them every chance to determine their own future. What we could not provide them was the will to fight for that future,” Biden said.

He said there are some very brave and capable Afghan special forces units and soldiers, “but if Afghanistan is unable to mount any real resistance to the

Taliban now, there is no chance that 1 year — 1 more year, 5 more years, or 20 more years of US. military boots on the ground would’ve made any difference”.

“And here’s what I believe to my core: It is wrong to order American troops to step up when Afghanistan’s own armed forces would not. If the political leaders of Afghanistan were unable to come together for the good of their people, unable to negotiate for the future of their country when the chips were down, they would never have done so while US troops remained in Afghanistan bearing the brunt of the fighting for them,” he said.

“We talked about how Afghanistan should prepare to fight their civil wars after the U.S. military departed, to clean up the corruption in government so the government could function for the Afghan people. We talked extensively about the need for Afghan leaders to unite politically. They failed to do any of that,” he said

“I also urged them to engage in diplomacy, to seek a political settlement with the Taliban. This advice was flatly refused. Ghani insisted the Afghan forces would fight, but obviously, he was wrong,” he added.