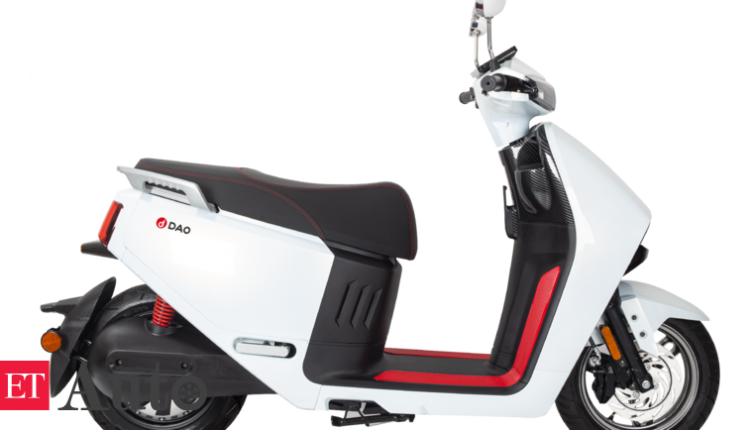 Dao EV Tech is set to be the next player to offer electric vehicles (EV) in India. It will debut with a ‘high speed’ electric scooter, Dao 703, in mid-January 2022. Bookings for the scooter opened on Thursday and deliveries also are scheduled to start then. With the sticker at INR 1.20 lakh, Dao 703 will cost INR 86,000 after the applicable subsidies, the company said. The Dao EV range starts at INR 60,000.

After entering the domestic EV market, Dao EV Tech wants to tap its India base for export to the US and Europe. “We’ll be shifting our exports from China after we begin manufacturing at a planned production facility in Chittoor, Andhra Pradesh. We already have the market base available,” Maneesh Singh, VP — strategic development, Dao EV Tech, told ETAuto.

Depending on the numbers that shift to India, the opportunity could be significant. During the pre-Covid year of 2019, the company exported 4 million units from China to the US and Europe, he said.

For the domestic market, the new player’s market journey will begin with a batch of 20 dealers in South India, and plans include having a nationwide presence with 300 dealers after around a year and a half. With a “humble” sales target of 30 for each dealer, Dao EV Tech wants to touch the one lakh mark in annual sales by then. “The idea is to ensure that the entire supply chain – distribution, technology, consumer, after-sales and operations – grows well, and makes a viable and profitable business for dealers,” Singh said.

Dao EV Tech plans to offer 3 other models in the first phase. Two of them will be ‘low speed’ models, aimed mainly for commercial applications. All Dao models will come with swappable batteries. Singh said his company wants to take a different approach from that of Ather Energy or Ola Electric who launched a single model offering a variant each. And to compete with them and the rest, Dao EV Tech plans to ramp up its product portfolio swiftly. “We have promised and committed that we’ll do at least two models every year,” he said. To gain consumer confidence in Dao EV Tech products, the company will offer free service for life. Warranty on the vehicle’s battery pack will be for 3 years, which can be extended to 6 years at a cost.

Michael Liu, Dao EV Tech’s chairman, inspired by the phrase, “a car for every purse and purpose” by the legendary president of General Motors, Alfred P Sloan, wants to offer a wide choice to Dao EV Tech’s customers. In India, the company is influenced by Maruti Suzuki in terms of market reach. “Our concentration is to go to every Tier 3, Tier 4 level market,” Singh said. It has appointed dealers in some of them. Grocery shops are also being roped in to serve as battery swapping centres in some places.

Though Dao EV Tech had set up its first assembly facility in Zaheerabad, it has now moved to a plant in Chakan, near Pune, as it didn’t find a favourable ecosystem near its first plant, which is now used as a warehouse.

As the journey progresses, the company plans to set up another plant in Delhi-NCR, most likely in the industrial hub of Manesar. While the EV maker has lined up such plans as an OEM, under the larger game plan, the 3S operations could be a fourth of the company’s overall business. The rest of the revenue is expected to come from other businesses of 3PL services, shared mobility, and battery swapping, which will be under a subsidiary of Dao EV Tech.

The Chinese EV maker, formed by a group of investors from China, India and USA, opened bookings for its electric scooters in India on Thursday. Deliveries are scheduled for mid-January. After subsidies the scooter will cost INR 86,000 . The company plans to make India an export base and it will launch at least two new models every year, the company said.

Ampere said the vehicle offers best-in-class comfort and functionally superior performance with a mileage of 121 km per charge, it said.

What does an alliance to end oil and gas mean for India?, Auto News, ET Auto