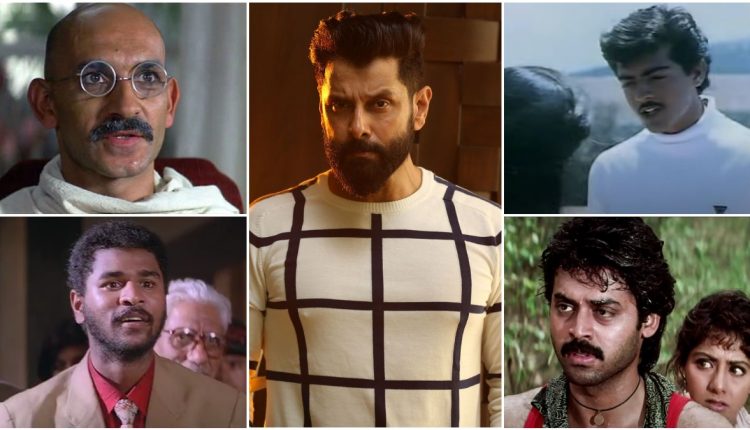 Every Tamil movie buff must be knowing that Chiyaan Vikram, one of the biggest superstars of Kollywood, didn’t have it easy when it comes to his acting career. He didn’t start off with a bang. Starting off as a model and then a stint in Doordarshan serial, Vikram’s career as a leading man didn’t exactly take off on a smooth runway. After early flops, Vikram has been working as second leads in Tamil and Malayalam cinema. ‘Chiyaan’ Vikram Birthday: 5 Best Films of the Kollywood Superstar That Are a Must Watch.

He has also been working as dubbing artiste lending his baritone to some very popular actors. Till 2000, he has done occasional dubbing for stars. Interestingly, it was in 1999 that Vikram got his breakout success as the main lead with the critically acclaimed Sethu. And in 2001, Vikram established himself as a superstar with the blockbuster success of Dhill. After which there was no looking back for Vikram, as he went on to give big hits in films like Gemini, Dhool, Saamy, Anniyan, Thaandavam, I etc. For his fantastic performance in the 2005 film Pithamagan, Vikram also won the National Award for the Best Actor, a time when National Film Awards had still not lost its credibility. Chiyaan Vikram Gets the Special Birthday Gift from Ajay Gnanamuthu! ‘Cobra’ Director Releases #VikramBDayCDP on Twitter.

As we salute this inspiring rags-to-riches story of Vikram, let’s look back to his early career, especially his work as a voiceover artiste, and look at some of the popular actors who benefitted from his deep voice. Starting off with…

Yes, when Thala – another outsider to the industry who made it big – was also learning the ropes of superstardom, Vikram had dubbed for the actor for two of his movies – 1993’s Amaravathi and then next year for Paasamalargal.

When Tamil dubbed version of Richard Attenborough’s Gandhi came out in 1998, Vikram had lent his voice to Oscar-winner Sir Ben Kingsley who played Mahatma Gandhi in the movie.

Vikram had also dubbed for Telugu superstar Daggubati Venkatesh when his Telugu film Kshana Kshanam was released in Tamil as Ennamo Nadakkuthu.

Abbas was a very popular star in some of the romantic movies in the ’90s and ‘2000s, before his career fizzled out. Vikram had dubbed for the Bengali-born actor in movies like Kadhal Desam, Poochudava, Aasai Thambi, Ini Ellam Sugame and even Kandukondain Kandukondain, the latter being Vikram’s last dubbing assignment.

When the dancing sensation Prabhu Deva turned actor with Shankar’s Kadhalan, it was Vikram’s voice you heard through his lips. Vikram also dubbed for him in movies like Raasaiyya, and Minsara Kanavu. Interestingly in the 1997 film VIP, Vikram has dubbed for both the movie’s male lead stars, Prabhu Deva and Abbas.

Vikram was the voice for Satya when the titular hero of Ram Gopal Varma’s classic gangster drama spoke in the Tamil for the dubbed version.

(The above story first appeared on Scoop Buddy on Apr 17, 2021 12:01 AM IST. For more news and updates on politics, world, sports, entertainment and lifestyle, log on to our website scoopbuddy.com).