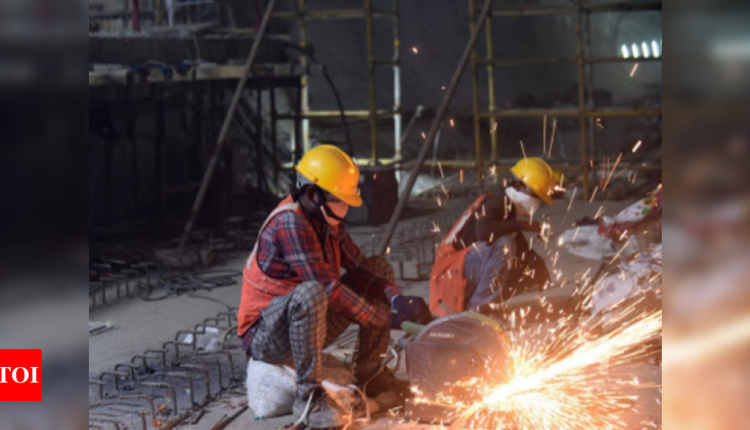 By admin On May 1, 2021
0
Share
NEW DELHI: Output in the eight key infrastructure sectors rose to a 32-month high in March, helped by last year’s low base and double-digit growth in steel, cement, electricity and natural gas segments. But the surge in Covid infections is likely to hurt industrial recovery as more states impose local lockdowns.
Data released by the department for promotion of industry and internal trade (DPIIT) on Friday showed the core sector — covering coal, crude oil, natural gas, refinery products, fertilisers, steel, cement and electricity — grew 6.8% in March compared with a contraction of 3.8% in the previous month and an 8.6% decline in the year-ago period. The first wave of Covid, which led to a strict lockdown in March last year, had hurt the sector sharply. For FY21, core sector output contracted 7% compared to 0.4% growth in the previous year.
The havoc unleashed by the second wave of Covid has already prompted several industries to halt production temporarily and the lockdowns imposed by states are also likely to weigh on factory activity. The core sector accounts for nearly 41% of the index of industrial production (IIP), data for which will be released later in the month.
“The low base of the lockdown would push up the yearon-year expansion of the index of eight core industries to a sharp 50-70% in April 2021, with exceptionally high growth expected in cement and steel,” said Aditi Nayar, principal economist at ratings agency ICRA.
0
Share FacebookTwitterGoogle+ReddItWhatsAppPinterestEmail

Only six states to begin vaccination for 18+ from today, Health News, ET HealthWorld

28 Years Of Damini: Did You Know Aamir Khan Did His First Item Song For The Film And Also Promoted Andaz Apna Apna With His Cameo? (Watch Video)

The Hungarian brand Keeway plots 8 models in India this year, eyes to enter…