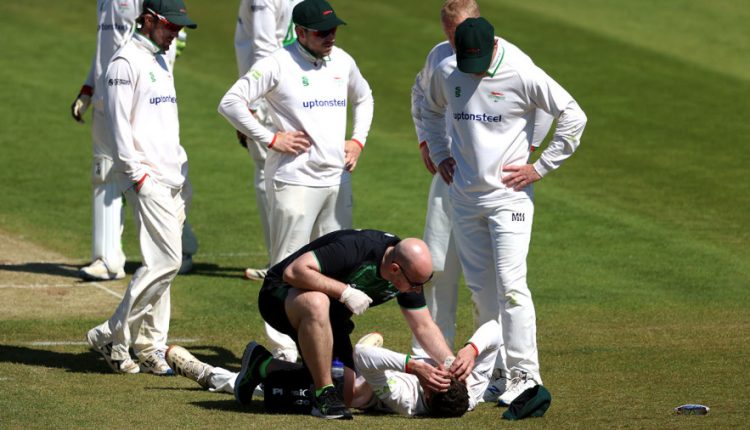 Half-centuries from Tom Abell and Steven Davies helped Somerset to an 85-run first-innings lead in their LV=Insurance County Championship match against Leicestershire, who were three down in their second innings and still 37 behind at the close.

The home side must also contend without skipper Colin Ackermann, who will take no further part after being struck on the forehead fielding at first slip just before lunch. Rishi Patel, his 22-year-old replacement under the concussion protocols, is not out overnight having made a gutsy 27 under pressure against a fired-up Somerset attack.

Abell played beautifully at times but rode his luck in making 88, surviving a close run-out call on 15 before being dropped on 54. He shared a 112-run fifth-wicket partnership with George Bartlett and although both were dismissed in quick succession by seamer Ben Mike, who finished with 3 for 50, Davies made a typically elegant 59 to give Somerset the upper hand.

Craig Overton then removed Harry Dearden and Marcus Harris in a devastating spell with the new ball, the former brilliantly caught by Abell diving to his left at slip before Australian Test opener Harris fell for just seven, miscuing a hook to square leg to leave them 21 for 3. Josh Davey had already found the edge to have Hassan Azad caught behind.

Somerset had been 53 for 3 overnight, but nightwatchman Jack Leach was Leicestershire’s sole scalp as 104 runs were added in an eventful morning in which Bartlett was also dropped on 21 in the incident in which Ackermann was injured.

Leicestershire were convinced Abell was gone to a direct hit by Lewis Hill, swooping to field on the leg side as he scrambled a single off Chris Wright, although it looked a difficult call for standing umpire Tim Robinson without the aid of technology.

After Leach was bowled off an inside edge by Mike, Abell was dropped on 54 off left-arm spinner Callum Parkinson, Ackermann shelling the chance at slip after the ball glanced the gloves of wicketkeeper Harry Swindells.

It was from a similar, turning delivery that Bartlett had his escape on 21, the ball again deflected by Swindells and this time felling Ackermann.

After treatment on the field, the 30-year-old South African-born all-rounder continued to field for the last two overs of the session but did not reappear after lunch.

Having added 55 to that point, the fifth-wicket pair continued to profit, Abell reeling off some beautifully timed off-drives and cuts to take their partnership into three figures.

When Mike had Abell caught at second slip, undone by a ball that swung away late, and Bartlett, on 48, pulled him straight to short mid-wicket, Leicestershire sensed a chance but Davies, though out tamely when he clipped a ball from Gavin Griffiths straight to leg gully, made sure the advantage was with his side.