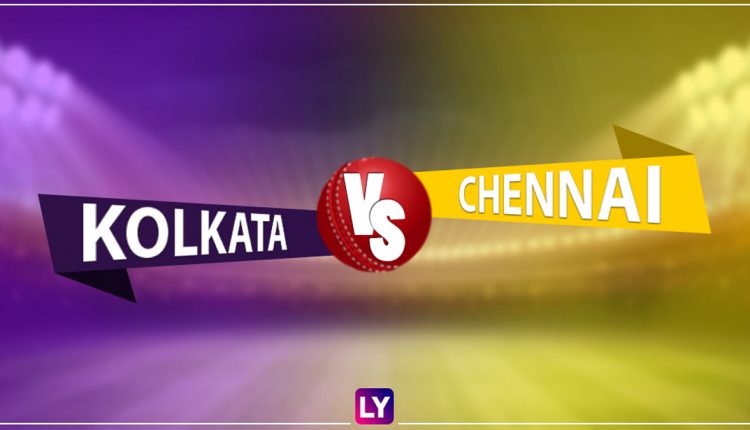 KKR vs CSK Live Score: Chennai Super Kings (CSK) will eye a third consecutive win when they play a fragile Kolkata Knight Riders (KKR) in their fourth match of IPL 2021. KKR vs CSK match in IPL 2021 will be played at the Wankhede Stadium in Mumbai on April 21 (Wednesday). Both sides had a contrasting start to IPL 2021 and have gone the opposite direction. KKR started their season with a 10-run win over Sunrisers Hyderabad but lost their next two games while CSK began with a disappointing defeat and followed it with wins over Rajasthan Royals and Punjab Kings. Meanwhile, stay tuned for the live score updates and live commentary for the KKR vs CSK match. KKR vs CSK, IPL 2021 Live Cricket Streaming: Watch Free Telecast of Kolkata Knight Riders vs Chennai Super Kings on Star Sports and Disney+Hotstar Online.

Kolkata Knight Riders won against Sunrisers Hyderabad by 10 runs after successfully defending 188 and lost both of their next two matches after batting first. Against Mumbai Indians they lost by 10 runs after failing to score 31 runs off 30 deliveries while against RCB, Kolkata fell 38 runs short while chasing 205 runs. Their batting has been a major disappointment so far in IPL 2021. Nitish Rana has hit a couple of half-centuries but Shubman Gill and Rahul Tripathi have thrown away start in all three matches while power-hitters Eoin Morgan, Dinesh Karthik and Andre Russell have failed to dominate matches. KKR vs CSK Preview: Likely Playing XIs, Key Battles, Head to Head and Other Things You Need To Know About VIVO IPL 2021 Match 15.

Chennai Super Kings have also issues with their batting and so far won both matches with some terrific bowling. Deepak Chahar’s opening spell against Punjab Kings, in which he picked four wickets, made the game lop-sided while Ravindra Jadeja and Moeen Ali changed the game with quick wickets against Rajasthan Royals. Jadeja picked two wickets in one over while Ali picked three for seven runs to turn the match for CSK. Moeen Ali has also been sensational with the bat but the others need to start firing.

Kareena Kapoor Khan’s Louis Vuitton Face Mask Is Just for the Elites As It Costs Rs 26,000!