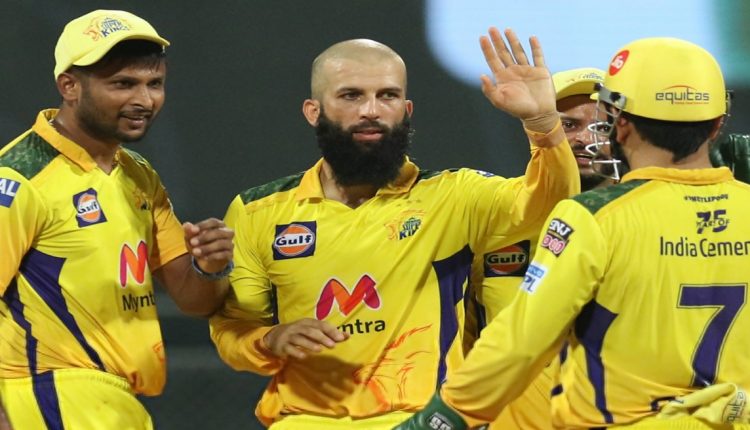 What was expected to be a cakewalk for the Rajasthan Royals actually turned out to be a horrible outing for Sanju Samson’s men against the Chennai Super Kings in IPL 2021 at the Wankhede Stadium in Mumbai. Moeen Ali was the man for CSK as he scalped three wickets and handed MS Dhoni and co their second win in the tournament. He also chipped in with the bat scoring 26 runs off 20 balls. In this article, we shall bring to you the stat highlights for the game, but before that let’s have a look at how the match panned out for both sides. IPL 2021 Points Table Updated: CSK Climb to Second in Team Standings After 45-Run Win Over RR.

It was MS Dhoni’s 200th match as the captain for the CSK. After winning the toss, Sanju Samson opted to bowl first. Chetan Sakariya snapped three vital wickets for Suresh Raina, MS Dhoni and Ambati Rayudu. Faf du Plessis was the one who scored maximum runs for the side.  The South African batsman scored 33 runs from 17 balls with four fours and a couple of maximums. Dwayne Bravo’s 20 from 8 deliveries was the icing on the cake for the team. The team scored 188 runs for the loss of nine wickets.

After the first innings, Chetan Sakariya had said that the total is quite chasable. But sadly wickets fell one after the other. Manan Vohra was the first one to go owing to a poor shot selection. Samson followed on 1. Shivam Dube, David Miller and others also could not support the crumbling batting order. Opener Jos Butler missed out on his half-century by a run. In the end, the team fell short by 45 runs.

Now, let’s have a look at the stat highlights:

# Faf du Plessis is on number five for the most number of runs scored in an over. He scored 18 runs with fours and a six.

With this, Chennai Super Kings climbs to number two on the points table with four points. Meanwhile, the Jaipur-based franchise is placed on number six with only six points.

(The above story first appeared on Scoop Buddy on Apr 20, 2021 12:12 AM IST. For more news and updates on politics, world, sports, entertainment and lifestyle, log on to our website scoopbuddy.com).