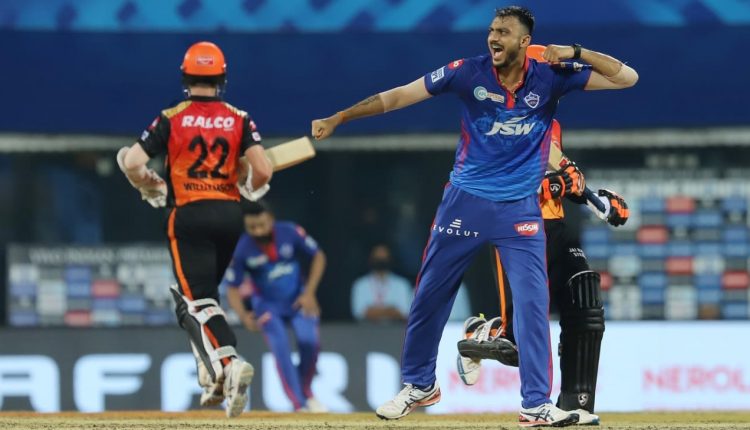 Axar Patel, playing his first IPL 2021 game after recovering from Covid-19, revealed following Delhi Capitals’ Super Over win against the Sunrisers Hyderabad that it was he who told the team management that he should bowl in the one-over shootout. Bowling at David Warner and Kane Williamson, Patel conceded only seven runs in six balls, which the Capitals chased down.

Patel said in the post-match press conference that the Capitals were planning on having Avesh Khan – who took 3 for 34 in his four-over quota – deliver the Super Over. But at the end of regulation play, Patel approached the Capitals captain RIshabh Pant and suggested that a spinner would be much harder to put away on the sluggish Chepauk surface. The assessment proved correct eventually as Patel bowled two dots, two singles, one leg bye, and one four.

“When I was in the dressing room, I was thinking that on this wicket, a spinner would be pretty effective,” Patel said. “When I came out of the dressing room, the coach and everyone were talking. The initial thought was to go with a fast bowler – Avesh Khan – because they would send a left-right combination.

“After that, when we were just stepping onto the ground, I thought a spinner would be more effective. So I told Rishabh that I could also bowl the over. Then he spoke to Ricky [Ponting], and it was decided at the last moment that I would bowl.”

Patel also said that the Capitals’ decision to not send both their openers – Prithvi Shaw and Shikhar Dhawan – in the Super Over chase of eight and instead of going for two left-handers in Dhawan and Pant was based on the dimensions of the ground, which were bigger on one side and, therefore, would allow more twos to be taken. That decision worked out against Rashid Khan, whom the Sunrisers fielded to bowl the Super Over.

Patel, who took 2 for 26 in his regulation four overs, said that he was match-ready ever since he came out of the medical facility in Mumbai where he spent nearly three weeks recovering from Covid-19. With the Chepauk surface assisting spinners, and Patel having rejoined the Capitals camp in Chennai on Thursday, he was asked by the management ahead of Sunday’s game if he felt fit enough to play, to which he said yes. The management told Patel that if he was ready, they he would slot into the XI right away. Patel said his confidence was boosted by his stellar returns against England in the recent home series.

“Even before Covid I was bowling well, in Test matches, and then I bowled in the T20Is too. So, I was carrying the same confidence,” he said. “I wasn’t thinking much that I have had Covid. After recovering from Covid, if I still keep thinking about it that I lost 20 days…obviously it was frustrating but I wasn’t thinking much about it.

“When I was in quarantine, the team-mates used to have a chat with me over calls, so I was thinking only the positive stuff that I would regain my rhythm and won’t think much about how I would do, or if my bowling or batting would be affected. So, I followed the basics, spent some time in the nets, and found the rhythm I wanted in those four days. After that, I was both mentally and physically ready.”

Tech has become the lifeline to survive: HCL CEO