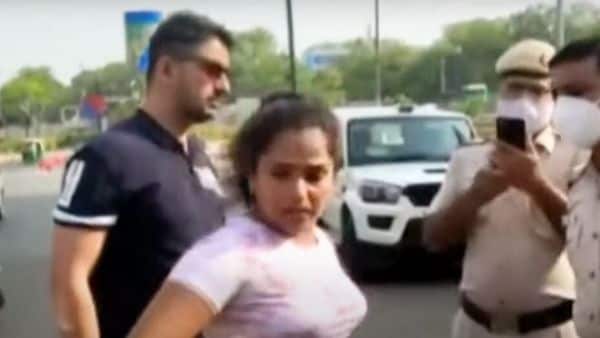 Delhi couple, in car and minus mask, yell at cops when stopped. Video goes viral

Despite numerous pleas and warnings to people to wear masks at all times when stepping out, the message may have fallen on a few deaf ears. But to come out all guns blazing against police officials when stopped for not wearing masks is a disease of another kind.

At a time when Covid-19 cases are rising at the rate of knots, wearing masks even while inside a car is mandatory and can invite a hefty fine in Delhi. A particular couple in the city may have missed the notice and were recently halted for not covering their faces inside their vehicle. Instead of admitting the wrong, the woman inside the car allegedly unleashed a verbal assault on the cops who were tasked with checking motorists.

In a video of the incident which has since gone viral online, the woman can be seen and heard yelling at the cops for ‘daring’ to halt the vehicle. “What if I want to kiss my husband,” she is heard asking in the video. She eventually comes out of the vehicle as her partner parks it on the side. There is, however, no calming the couple as they continue to disregard authority and the uniform.

Ironically, there was a weekend curfew in place in Delhi and the couple was also unable to justify why they were out in their car, at least not in the video captured anyway. Instead, the woman keeps the yelling going for several minutes before a lady police personnel tries to calm her down.

According to reports, the couple has been identified as Pankaj and Abha, residents of Patel Nagar. An FIR under various sections have been lodged against them.

The Delhi High Court has made wearing masks mandatory even if a person is alone in a private vehicle. And at a time when Delhi is seeing more than 20,000 positive cases each day, the battle against the pandemic may well be fought within the confines of masks.

What you need to know about the J&J vaccine