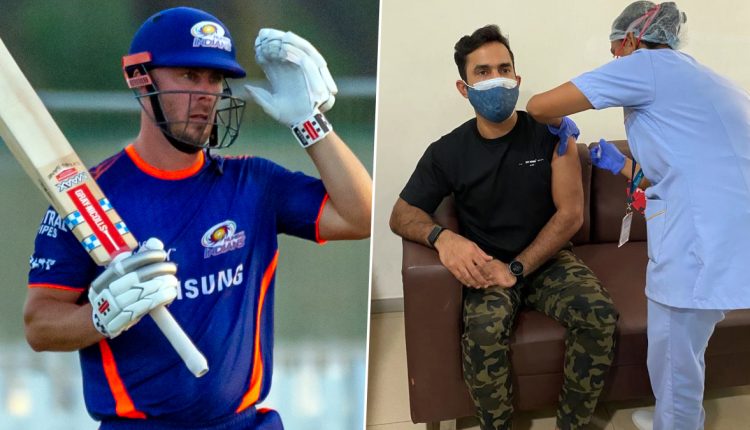 Dinesh Karthik was involved in a hilarious banter with former Kolkata Knight Riders opening batsman Chris Lynn on Twitter. Karthik also left the fans in splits after a cheeky reply to Lynn when the latter tried to troll him. It all started when Karthik shared a picture of himself receiving the first dose of the COVID-19 vaccine. The KKR wicket-keeper batsman captioned the pic as “vaccinated”. In the picture, Karthik is seen sporting a black shirt and camouflage pants. Lynn, who plays for Mumbai Indians in the IPL, is currently in Maldives quarantining with the rest of the Australian contingent as they wait for the Australian government to allow back into the country. Shikhar Dhawan Likely To Captain India in White-Ball Series Against Sri Lanka.

Lynn commented on Karthik’s picture and took a sly dig at his camouflage pants. “Could have at least worn pants,” the Australian and former KKR batsman commented on the pic trolling Karthik for his camouflage pants. Karthik, however, got the better of Lynn with a hilarious reply. “I was thinking shorts like you, then realised I’m not in Maldives. So wore this,” Karthik said in reply leaving the fans in splits. Take a look at the banter between Karthik and Lynn on Twitter. Australian Cricketers Quarantining in Maldives Rattled by Falling Chinese Rocket Debris.

Could have at least worn pants

I was thinking shorts like you , then realised I’m not in Maldives . So wore this 😂

Karthik, meanwhile, return to his home in Chennai following the suspension of IPL 2021. The tournament was suspended last week due to a surge in COVID-19 cases in IPL bio-bubbles. KKR’s Varun Chakravarthy and Sandeep Warrier, Amit Mishra of Delhi Capitals and Sunrisers Hyderabad’s Wriddhiman Saha were the cricketers, who tested positive for the virus leading to BCCI suspending the IPL for an indefinite period.

(The above story first appeared on Scoop Buddy on May 11, 2021 08:00 PM IST. For more news and updates on politics, world, sports, entertainment and lifestyle, log on to our website scoopbuddy.com).

After Victory in Kerala, CM Pinarayi Vijayan Says ‘Fight Against Coronavirus Will Continue’