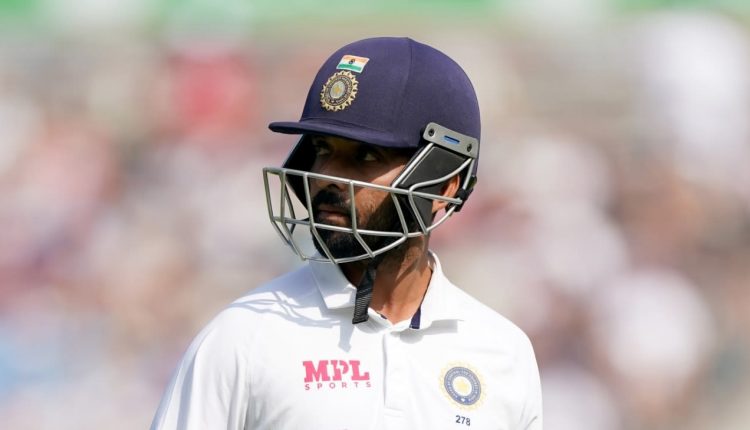 Rathour says if Rahane has any technical issues, they shouldn’t be discussed mid-series or mid-game

Shardul Thakur has scored 117 runs in the fourth Test with his twin fifties. That is eight more than India vice-captain Ajinkya Rahane has aggregated across seven innings in this series so far with a solitary half-century.
Since the start of 2020, Rahane is averaging 24.76 in Tests, which is the lowest among the 34 international players with 500-plus runs. In this period, he has lodged just one century alongside two fifties in 27 innings.
Consequently, the question that, as Sunil Gavaskar claimed, was being whispered at the outset of the England tour has now grown louder: is it time for India to drop Rahane for the final Test in Manchester? While the overwhelming vote on the poll posted on ESPNcricinfo’s Live Report on day four was in favour of Rahane being dropped, Indian batting coach Vikram Rathour disagreed, saying the Indian team management had not yet “arrived to that point” where Rahane’s woeful form had become a concern.

“Not at this point,” Rathour said at the media briefing after stumps on Sunday. “As I have said earlier, when you are playing cricket for a such a long time you will have phases where you will not get runs. That is the time as a team we need to back them and support them as much as we can. As we saw with Pujara also – him getting more opportunities and he’s come back. He has played a couple of very important innings for us. So we are hoping that Ajinkya will get back into form and he will still play a major role in Indian team’s batting. So I don’t think we have arrived to that point that it should become a concern.”

Since the beginning of 2017, Rahane has averaged 34.50, which is the fourth-lowest among 19 players with over 2000 Test runs. When asked whether such a long stretch of inconsistency coupled with low scores indicated Rahane had gaps in his technique, Rathour once again felt that was not the case or at least not the appropriate time to address the issue, if there was one.

“When you are playing such an important series like this one and when you are playing in the conditions which are tough for batting, we are playing against such a disciplined attack which has been bowling really well, so as a batting unit, technique is the last thing you should be thinking. This is the time you need to be really looking at what the bowlers are doing, how’s it coming off the wicket and what your game plans are.

“So I don’t think we are looking at technique at this stage at all. There is time and place to work on technique, I don’t think it is mid-series or mid-game. So if there are any issues it can be addressed later when he has time. But at this point of time everything that is being discussed is about the game plans, how they approach the innings, what they are thinking when they are playing and looking to score runs. That’s it.”

Rathour also pointed out that promoting Ravindra Jadeja to No. 5, Rahane’s batting position for long, was primarily aimed at getting the left-right combination in the middle order instead of having two left-hand batters at Nos. 6 and 7 along with Rishabh Pant.

“It was a simple strategy,” Rathour explained. “Jadeja was batting with a lot of control so as a team we wanted to see how it affects our balance and momentum in the middle. In both innings it worked to an extent – even today he had a pretty good partnership with Virat, about 59 runs, which worked for the team. Whether it would be a long-term plan, we will have to wait for that.”