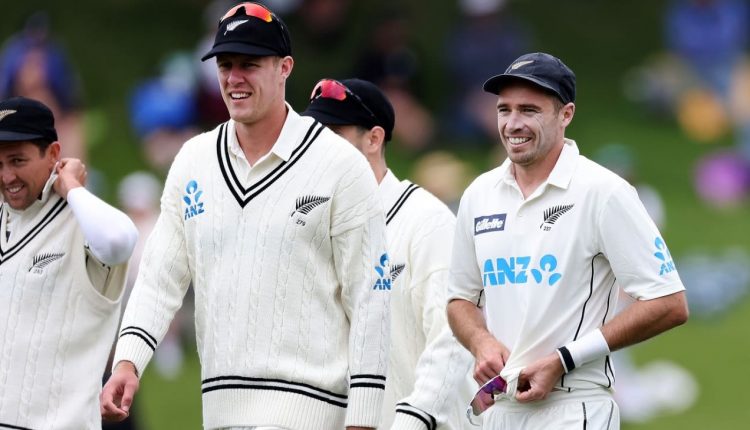 New Zealand fast bowler Kyle Jamieson will have “conversations” with his fellow quicks about the Duke ball and be “mindful” of how it behaves during the upcoming tour of England.

One big reason for New Zealand’s consistency in Test cricket over the last few years has been the battery of pacers they have built, including their latest recruit Jamieson. On his first England tour, Jamieson has for company the experience of Trent Boult, Tim Southee, Neil Wagner, Doug Bracewell and Matt Henry, who have combined to play 14 Tests in the country.

“Their experience [will be really helpful] – from the guys like Tim, Wags, Doug and even Henry as well, who’s played a lot over here,” Jamieson said. “There’s so much experience around English conditions and what the Dukes ball can do. So I’ll try and look [and] lean on for the next few weeks.”

Like most sides that tour England, the talk among the visiting bowlers is expected to be around the Dukes ball, which tends to aid a lot more swing than both the Kookaburra – used in New Zealand – as well as the SG ball. But Jamieson first wants to get used to the Dukes ball and its challenges, already wary of expecting it to do a lot.

“It’s is certainly a bit different – it’s a bit darker and harder as well, [and] the seam is a little bit more narrow. So it’s just [about] trying to get used to that and the hands,” he said. “There have been conversations around what the Dukes ball can do, but whilst being mindful of the fact that you don’t want to go searching too much and try to move the ball too much, and then getting caught on the bounce a little bit. So I’m sure over the next few days we’ll have a few more conversations on what it looks like and then go from there.”

New Zealand’s scheduled warm-up fixture was replaced with a two-day intra-squad practice game instead to begin on Thursday. This will now facilitate an extra day of training outdoors, with the first Test against England set to start next Wednesday at Lord’s before the second Test at Edgbaston from June 10. The World Test Championship final against India will be starting on June 18 in Southampton.

US exchanges offer a rich potential target for hackers

COVID-19 Vaccine Update: Moderna Plans to Ask Regulators to Expand its Vaccine’s Use to 12-17 Age Group