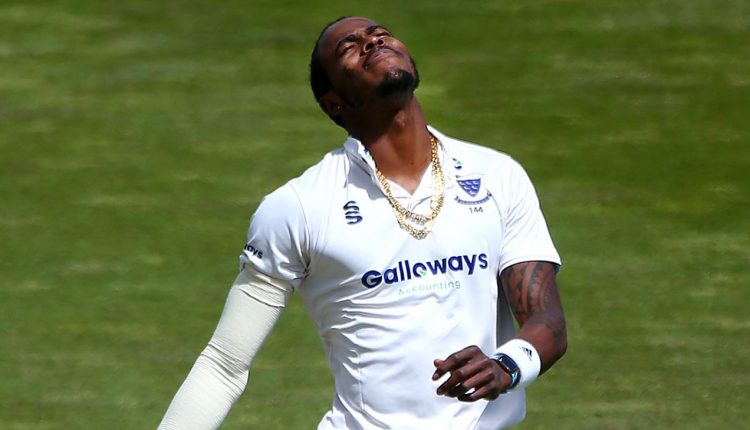 Jofra Archer has been ruled out of England’s two-Test series against New Zealand, starting at Lord’s on June 2, and may face surgery on his troublesome right elbow after failing to come through this week’s return to first-class action.

Archer, who was withdrawn from this year’s IPL prior to its postponement earlier this month, had undergone a series of cortisone injections to enable him to get through the T20I leg of England’s white-ball tour of India in March.

He also underwent an operation on the middle finger of his right hand while receiving further treatment on his elbow, to remove a splinter of glass following a bizarre incident involving a fish-tank. He showed no ill effects following that treatment and has been playing without protection on the affected digit.

After a low-key return to action for Sussex’s second XI against Surrey two weeks ago, Archer appeared to be returning to his best when he picked up two wickets, including his England Test team-mate Zak Crawley, in a hostile new-ball burst on his return to the County Championship against Kent at Hove this week.

However, he bowled just five overs in Kent’s second innings, and none on the final two days of the match, a situation that appeared to have caused confusion for his Sussex captain Ben Brown on the third morning, when he gestured for Archer to open the bowling but had to turn instead to his team-mate George Garton.

“I think there was some confusion over the state of his elbow,” Ian Salisbury, Sussex’s head coach, said at the time. “Ben thought he was going to bowl but his elbow’s sore and so he couldn’t bowl. Regarding any other information about his elbow, it’s the ECB’s job to answer that.”

An ECB statement subsequently confirmed that Archer “was suffering from pain in his right elbow when bowling and was unable to bowl in the final two days of the match.

“The England and Sussex medical teams will now seek guidance,” the statement continued, “and Archer will see a medical consultant later this week to determine the next course of action on the management of his elbow.”

The option of surgery may be the preferred course of action for Archer and for England – not to mention his IPL franchise, Rajasthan Royals – given his importance to the team’s plans across formats in the back-end of the year.

As the MVP in the last IPL in November 2020, and following a series of hostile displays in the 3-2 series loss in India, Archer’s value to England’s T20I attack is paramount, especially given that the team will go into the T20 World Cup in October and November as one of the favourites, and seeking to become the first team to hold the 50-over and 20-over titles concurrently.

Then there is the Ashes campaign in Australia hot on that tournament’s heels – a tour that England’s Test captain, Joe Root, admitted this week was the “pinnacle” of their plans for 2021, notwithstanding a five-match home series against India before that.

In the meantime, England have already indicated that they will be giving opportunities to fringe members of their Test squad during the New Zealand series – not least among them, Archer’s fellow Sussex seamer Ollie Robinson, who has been a fixture in the bio-secure environment without yet being given a Test debut.