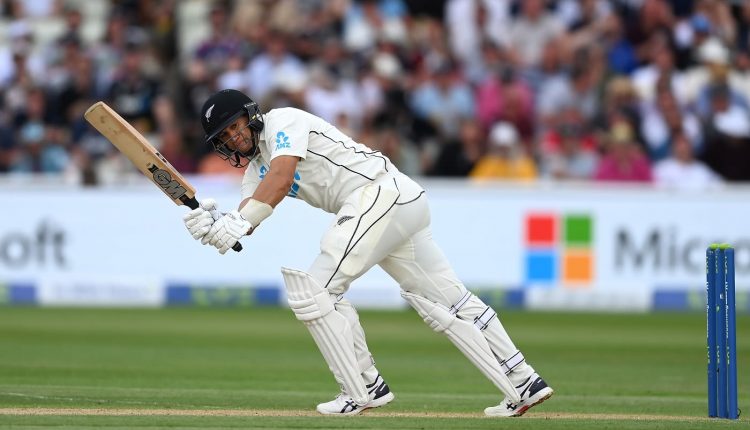 By admin On Jun 12, 2021
0
Share
Welcome to day two of our live report of the second Test between England and New Zealand from Edgbaston. Join us for updates, analysis and colour. You can find our traditional ball-by-ball commentary here.

* Most recent entry will appear at the top, please refresh your page for the latest updates. All times are local

New Zealand boasted an embarrassment of riches for a second day running as Devon Conway and Will Young frustrated England’s bowlers and moved to within 74 runs of the hosts’ first-innings 303 with seven wickets in hand at Edgbaston.

Conway, who put his place in the side beyond doubt with 200 on debut in the first Test at Lord’s, produced another valuable, though not chance-less, innings of 80. And, while he would have been disappointed not to press on to triple figures again, a gutsy 82 from Young – in the side as a replacement for injured captain Kane Williamson – mitigated the damage.

Stuart Broad bowled superbly for his 2 for 22 from 15 overs, including six maidens, but he was the only England bowler to reap any reward for his considerable efforts – until Young’s dismissal by part-time off-spinner Dan Lawrence on the last ball of the day.

Stuart Broad has just finished an eight-over spell which spread across the tea interval, conceding only 12 runs and taking the wicket of Devon Conway, caught at deep backward square leg. It was his working-over of Ross Taylor – a man he has dismissed ten times in Test cricket – that was particularly impressive, with James Anderson providing support at the other end.

Broad’s plan was to set him up with a number of outswingers, dragging him across the crease before angling one back in, and he beat the bat a number of times, putting his hands on his head in frustration after missing the top of off stump by a hair’s breadth. With the crowd urging him on, he hit 87mph/140kph at times and was consistently operating in the mid-80s – according to a Sky Sports graphic, his average speed this summer has been higher than in any of the last three years.

Agonisingly, he couldn’t get his man, and while Anderson had him given out lbw shortly after the end of Broad’s spell, the decision was overturned on review with the ball clearly missing leg. Taylor is a notoriously poor starter and has looked out of nick on this tour. With Will Young gritting his way to a half-century, Taylor could do with a score here: Kane Williamson will return to the side in the WTC final next week and it is not beyond the realms of possibility that Taylor could be the man to miss out.

Stuart Broad finally strikes again with the valuable wicket of Devon Conway, who picks out Zak Crawley at deep square leg for 80. New Zealand are 137 for 2 and Broad is trying to get the crowd more involved as he looks to boost his impressive figures of 2 for 19 from 12 overs.

Whipped away with that Conway flourish that we are used to by now, but he has found deep square leg with it. That is that idiosyncratic flair-filled shot. Most people flick this length ball off the pads into the ground, but Conway likes to give it a Humpty. This time he has hit this straight down the throat of deep square leg. Just the break England needed

England rue a couple of missed opportunities, one they couldn’t do anything about with Zak Crawley not awarded a slips catch to dismiss Devon Conway for 22 when the soft signal was not out (bump ball) and the hosts’ review couldn’t unearth enough evidence to show the ball hadn’t, in fact, touched earth. And then Joe Root shelled a slips catch that would have sent Will Young packing for just 7.

As it stands, Conway and Young have put on an unbroken stand of 115 for the second wicket.

New Zealand are ticking along nicely here with England in need of a breakthrough. Conway and Young have pushed their partnership up to an unbroken 111 with Conway 78* and Young 36*. They’ve just changed the ball, Stuart Broad will look to see what he can do with this one. He beats the bat with his first delivery since the change, seaming away from Conway’s attempted defence, and ends with a maiden.

Joe Root is into the attack as England’s spinner with the home side seeking to break up this partnership between Devon Conway and Will Young, worth 73*.

Sampath Bandarupalli, our statstician, pointed out: “Between 2004 and 2020, England played just one home Test without a front-line spinner in the XI (vs SA in 2012 at Leeds).” Now they’ve done it twice in as many matches this summer.

Devon Conway, who made such a remarkable debut at Lord’s with 200 in the first innings, brings up his fifty with a drive off a Joe Root half-volley just past deep cover, running two as Stuart Broad fields.

Having survived on 22 when Zak Crawley’s slips catch off Broad’s bowling wasn’t given amid doubt over whether the ball touched the ground, Conway is now 51 not out and Will Young unbeaten with 21, their partnership worth 69*.

Joe Root, the England skipper has just juggled – and dropped – a catch that would have dismissed Will Young on 7. A lovely ball from Olly Stone found the outside edge and the ball sailed to Root at first slip. He had a couple of goes at grabbing it as he went to ground but couldn’t hold on! It looked a pretty standard chance too. New Zealand were 52 for 1 at the time.

Regardless of your team loyalties, this celebration of fans returning to the stands at Edgbaston is pretty enjoyable to watch. Yes, he’s understandably biased, but it warmed the cockles of Chris Woakes’ heart.

Devon Conway steers New Zealand to lunch at 43 for 1 in the face of an excellent spell from Stuart Broad, which netted him the wicket of Tom Latham for 6 and gave him figures of 1 for 10 so far. Conway is 27 not out and Will Young – in the side for Kane Wiliamson, who has sore elbow – is unbeaten on 6.

12.50pm: Another close call for Conway

Devon Conway, the double centurion on debut at Lord’s, has had another escape. Conway edged Stuart Broad to Zak Crawley at third slip and it was one of those where it was difficult to tell whether the ball hit the ground as Crawley was taking the catch. He definitely got his fingers under it but the key was that the soft signal given by the on-field umpire was not-out. Broad was incensed but, on review, there was just enough doubt for the decision to stand. Broad. Not. Happy.

A hearts-in-mouths moment for New Zealand fans there, but Devon Conway keeps his cool. Tom Latham strikes the ball straight back down the pitch and Stuart Broad, in his follow-through, manages to get his fingers to it before it crashes into the stumps at the non-striker’s end. Conway, who was advancing, was watching the ball like a hawk as well though, and managed to turn and stretch his arm out, getting his bat back inside his crease in time.

A Dan Lawrence-led recovery has pushed England’s first-innigs total to 303. Lawrence was unbeaten in matching Rory Burns’ top score for England of 81 while Mark Wood produced some entertainment – and valuable runs – with a knock of 41 before he was bowled by Matt Henry.
Trent Boult, who took two wickets yesterday, cleaned up the tail, Stuart Broad caught behind for a duck and James Anderson lbw for four. Anderson was initially given not-out by umpire Richard Kettleborough but that decision was overturned on review, which showed Boult had beaten the inside edge with the ball tracking to hit leg stump.

Now, with New Zealand getting the ball to swing nicely, home fans will eagerly anticipate seeing Anderson, playing an England-record 162nd Test, do the same.

I could tell you how Mark Wood came rollicking out of the blocks this morning, cutting, pulling, driving and dinking like an Ashington Sehwag, but Sid Monga said it better on the ball-by-ball commentary. Matt Henry ended the fun with a full ball, inside-edged onto the timbers, but it’s given England the leg-up they needed, even if Stuart Broad has just nicked off to Trent Boult for a duck. Dan Lawrence has the record-breaking James Anderson for company at 289 for 9, and the onus is on him now to push England past 300.

Here’s Matt Roller with a more considered take on the morning’s tonkings:

“Joe Root highlighted the “added responsibility” that England’s bowlers have with the bat on the eve of this series. “If we’re going to grow as a team, if we’re going to become more consistent, we’ll have to add lower-order runs,” he said.
While opting to pick Olly Stone – who has batted at No. 10 for most of his first-class career – as a No. 8 might seem to fly in the face of those comments, England’s tail has taken on the additional responsibility.

Out of England’s six 50+ partnerships in this series, three have involved lower-order contributions: 52 between James Anderson and Rory Burns and 63 between Burns at Ollie Robinson at Lord’s, plus 66 between Dan Lawrence and Mark Wood here. Stone also added 47 alongside Lawrence last night, helping England towards 300 after they had slipped to 175 for 6.”

Rory Burns has reflected on his knock of 81 yesterday and he spoke to Sky Sports at the close about his form, which includes a first-innings 132 in the first Test at Lord’s and seven fifties in 10 Championship innings this season. That came after he lost his place in the Test side on England’s recent tour of India. Here’s what he had to say:

“It’s been quite a quite a tough day of Test cricket, it’s been pretty even there by the end, I think Dan [Lawrence] has played really well there and in that latter part of the day, probably got us back to scrapping away quite nicely so there’s a there’s something in that surface for everyone.

“It’s probably swung a little bit more for them after lunch, and whether that’s conditions over top or on the surface we’ll see.

“I felt good, my rhythm’s felt good coming from county cricket and into this environment. I’ve felt in a good place in summer, which is pleasing. It’s nice to be able to get in there and get in amongst it.”

Welcome back to the our coverage of the second Test at Edgbaston and all eyes will be on Dan Lawrence, England’s No. 7 playing his seventh Test and unbeaten on 67. From a home perspective, England want to see how many more he can add to their score of 258 for for 7 with Mark Wood not out 16 and Stuart Broad and James Anderson to come. Lawrence will be the main wicket New Zealand are focused on prising out on this second morning before getting stuck into the tail.

Higher up the order, England have some concerns, as explained by George Dobell while Matt Roller writes that New Zealand showed their impressive strength in depth in making six changes to the side which drew at Lord’s and three of the bowlers who came in – Trent Boult, Matt Henry and Ajaz Patel – claiming two wickets apiece so far.

Valkerie Baynes is a general editor at ESPNcricinfo