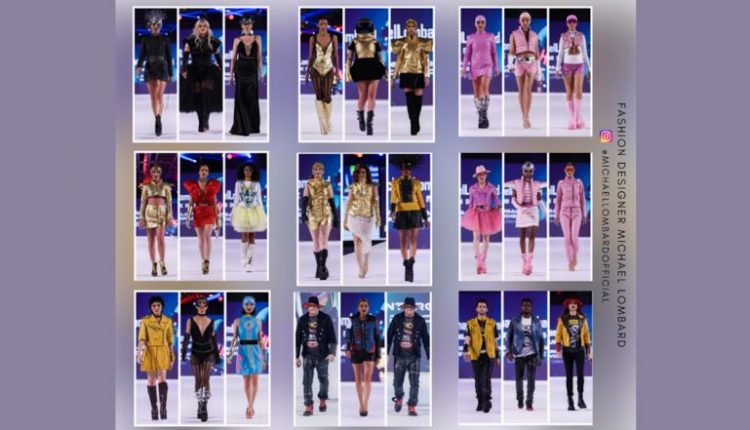 The talented fashion designer Michael Joseph Lombard blew the audience of VIE fashion week asway with his latest, and most unforgettable collection to date, the Intergalactic Psychedelic Collection. Lombard’s collection will remain at the forefront of the audience’s minds, as the designer brought home the “International Fashion Designer of the Year” award.

This award is presented to the most skillful and artistic designers of our current generation. It aims to highlight and applaud talent that knows no boundaries. Michael Lombard has been graced with the award after proving that he isn’t just a player in the fashion industry, he is a pioneer.

The three-day fashion extravaganza began on July 1, with an electric show from New York’s King of Leather – Michael Lombard. Michael closed the opening day with his latest collection, and for those who missed the breathtaking show, the designer also hosted the premium slot on the closing day of VIE fashion week.

When you think of leather, your mind is automatically drawn to dark winter colors and familiar silhouettes. However, Lombard has once again shown that he is unafraid to push the envelope when it comes to creativity. His runway looks stand out with bright metallics and bold hues of pinks, blues, yellows, and reds.

Not only did the clothes stand out from the crowd, but so did the accessories. Extravagant headpieces, jewelry, and hats perfectly complemented the luxurious leather looks. Some of the models even sported studded headpieces, a look that conveyed a warrior-like aura.

Michael’s studded and styled intergalactic warriors were marching to the beat of uplifting and energetic music. Those who wear a garment designed by Michael Lombard are fearless. Like Michael, they are unafraid to unleash and express their creativity. His clothes epitomize the saying that life is truly too short to wear ordinary and mundane clothing.

The fashion designer himself, Michael Joseph Lombard, sported one of his own designs as he waved the audience goodbye. He flaunted a dusky black fedora with a rich red tone peeping out from underneath. This color combination is timeless and iconic which makes us certain that the garment will be at the top of everybody’s shopping list.

Other standout looks include the quintet of candy pink leather outfits. This fantastic and vivacious color is exactly on trend with this season and Lombard’s all leather looks brought a new lease of life to one of summer’s hottest trends.

Five of the models in Lombard’s latest show were dressed head-to-toe in candy pink looks. Pink is typically one of the softest and daintiest colors out there, but Michael gives the hue a whole new dimension. As a fashion designer, Michael Joseph Lombard has the gift of matching traditionally contrasting concepts to create harmonious and innovative looks.

Take for example his pink leather mini dress, a garment that traditionally screams femininity. However, the high neck, long sleeves, and studded element gives this garment a whole new edge.

Leather jackets, blazers, dresses, shorts, pants, belts, shoes, and headpieces were all exhibited at VIE fashion week. Lombard may be known as the King of Leather, but he mixes and matches his luxury materials with fabrics, like cotton, polyester, and wool, to create a well-rounded ensemble.

No Michael Lombard show would be complete without a guest celebrity appearance. After all, the designer has dressed stars like Bebe Rexha, Rico Nasty, Paula Abdul, Prince Royce, and Lele Pons. This year, Michael Lombard had the pleasure of hosting reality TV stars Kelsea and Cole Moscatel as they made their runway debut at VIE fashion week in Dubai.

If one thing is for certain, it’s that the fashion world has been kept on their toes, and everyone is waiting to see what move Michael Lombard will make next.