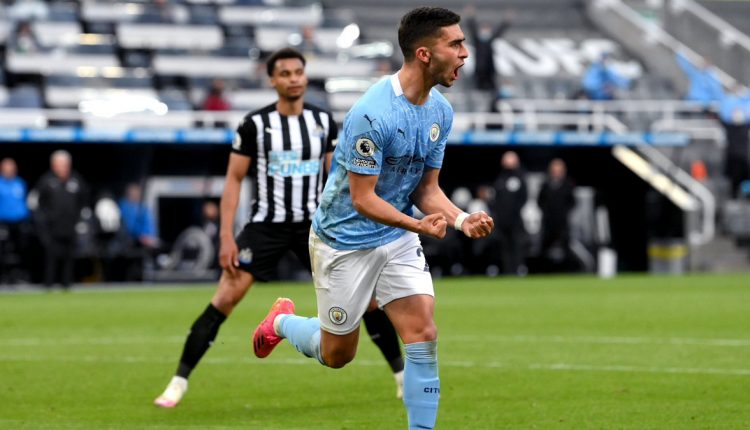 Manchester City’s first game as the new Premier League champions was a roller coaster as Pep Guardiola’s side managed to get the better of Newcastle United in a seven-goal thriller. The new champions of England emerged victorious on Tyneside with youngster Ferran Torres scoring his first hat-trick for the club and in the process, surpassing Lionel Messi to record a unique feat under the Catalan manager. Manchester City Crowned Premier League 2020–21 Champions, Kevin de Bruyne, Sergio Aguero and Other City Players React to League Title Win.

Ferran Torres registered his first hat-trick in a Man City shirt on Friday as the English giants won the game by an odd goal in seven against Steve Bruce’s Newcastle United. In doing so, the Spanish forwards, also became the youngest player (21y 75d) to net a treble in a league game under Pep Guardiola, surpassing the record previously set by Barcelona’s Lionel Messi (22y 200d).

21y 75d – Ferran Torres is the youngest player to score a league hat-trick for a Pep Guardiola team, with the previous-youngest being Lionel Messi against Tenerife in January 2010 (22y 200d). Company. pic.twitter.com/6CMzqLsGFL

Lionel Messi achieved the feat in 2010 against Tenerife when Pep Guardiola’s Barcelona defeated them 5-0 in a La Liga encounter and fast forward 11 years, Ferran Torres surpassed that record, scoring a hat-trick in a sensational 24-minute spell on either side of half-time.

Newcastle United took the lead through Emile Krafth but were pegged by Joao Cancelo’s equaliser and then City were put ahead by a sensational finish from Ferran Torres, who then scored twice in quick succession after goals from Joelinton and Joe Willock had given the Magpies a 2-1 lead on the night.

The Spain international has now scored 12 goals for City this season, with five of those coming in his last five matches. He also has two hat-tricks to his name this campaign having scored a treble for Spain in a 6-0 Nations League win against Germany last November.

(The above story first appeared on Scoop Buddy on May 15, 2021 09:05 AM IST. For more news and updates on politics, world, sports, entertainment and lifestyle, log on to our website scoopbuddy.com).