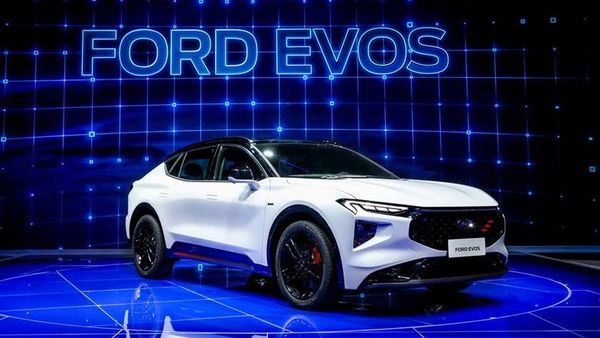 Ford has unveiled its Evos SUV at the ongoing Shanghai Auto Show. The SUV is the first vehicle the automaker has developed mostly in China. Initially, the Ford Evos will be sold in China only, but it could serve as a successor to the recently discontinued Ford Fusion and the overseas-only Mondeo.

Talking about the design of the Ford Evos, it gets a light bar above the “3D parametric style” front grille connecting the LED headlights. The dual tone coloured body, pop-out door handles are something that grab attention easily.

Inside the cabin, it gets a 3.6-feet long wide display stretching nearly the entire length of the dashboard. It includes a 12.3-inch digital cluster and a 27-inch 4k touchscreen infotainment system surrounded by a stitched instrument panel.

The infotainment system comes with Ford’s Sync+ 2.0 with Baidu’s AI technology. Just like the Mustang Mach-E and the new F-150, the Evos supports over-the-air software updates. The just-revealed BlueCruise Level 2 driver-assist tech is also part of the package.

Ford has not revealed what’s under the hood of this car. But the Evos is not a pure battery-electric model. Instead, it is a plug-in hybrid. Interestingly, back in 2011, Evos nomenclature was used for a concept that previewed the styling direction for the current sixth-generation Mustang.

‘Why is Covid an Issue Only in Bengal Polls, Not Assam, Kerala, Tamil Nadu:’ Amit Shah