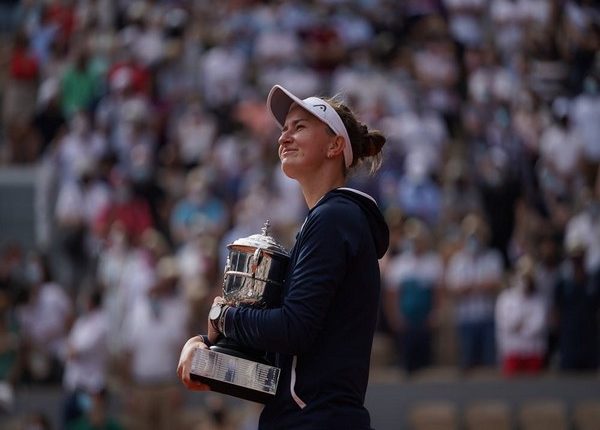 If not for the courage of an 18-year-old Krejcikova to go knock on the door of the late, great Jana Novotna, uninvited for the advice, Barbora doubts she would be celebrating an unthinkable ascent to the summit of the Roland-Garros podium. Barbora Krejcikova Wins French Open 2021 Women’s Singles Title, Beats Anastasia Pavlyuchenkova.

Unseeded Barbora ousted Russian Anastasia Pavlyuchenkova 6-1, 2-6, 6-4 on Court Philippe-Chatrier on Saturday to lift the Suzanne-Lenglen cup in a perfect tribute to the former Wimbledon champion.

“I was going through a really hard time when Jana [Novotna] was passing away, I was most of the time her, and I really wanted to experience this because I thought it’s just going to make me really strong. Pretty much her last words were, ‘Just enjoy and just try to win a Grand Slam. I know that from somewhere she’s looking out for me and all of this, what happened these two weeks is because she is just looking after me probably and I just want to really thank her.

“It’s amazing that I had a chance to meet her and that she was such an inspiration for me. I just really miss her but I hope she’s happy right now and I’m extremely happy.”

Over the course of these last few years, Krejcikova time to time has made it clear that her relationship with the great Jana Novotna has played a pivotal role in her success.

The Czech legend, who coached Krejcikova from 2014 to 2017 before passing away after a battle with cancer in November 2017, is revered by those who knew her and widely adored in the tennis community. Her legacy continues to grow further now, thanks to the success of Krejcikova.