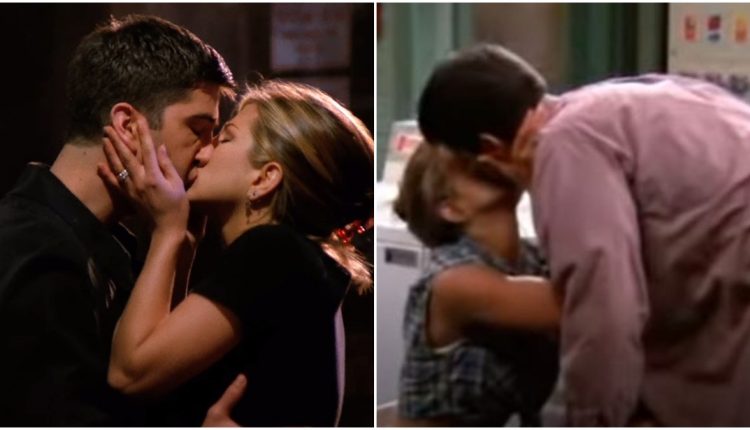 The FRIENDS main stars – Jennifer Aniston (Rachel Green), David Schwimmer (Ross Geller), Courtney Cox (Monica Geller), Lisa Kudrow (Phoebe Buffay), Matt Le Blanc (Joey Tribbiani) and Matthew Perry (Chandler Bing) – returned one more time back to the sets for a special, unscripted (or so they say) episode after 17 years. The special is now airing on HBO Max and Zee5 (latter in India), with the main cast members reminiscing about memorable moments from the series, and celebrity guests talking about their favourite moments. FRIENDS the Reunion Review: Nostalgic, Heartbreaking, Touching and Somewhat Stretched, ‘The One Where It All Comes Back’!

In between, the actors do table-reading sessions where they reenact some very popular scenes from the sitcom. One such scene is the moment where Ross and Rachel kiss near the entrance of Central Perk, that happens in Season 2 Episode 7 titled The One Where Ross Finds Out.

Before the session starts, Aniston talks about how special the scene is, because it is the first kiss between Ross and Rachel, and the beginning of their ‘will they, won’t they’ romantic relationship. FRIENDS The Reunion: 7 Best Moments From the Special Episode That Brought FRIENDS Together After 17 Years.

However, Aniston was totally wrong about this scene being Ross and Rachel’s first kiss. That happened quite a few episodes back that too, in the first season (episode 5 titled The One With the German Laundry Detergent). Also the setting was not even Central perk, but a laundromat. What’s more, the kiss was not even romantic, but a show of thanks! And yes, it was not a passionate kiss like the above scene, but more of a lingering peck that left Ross blushing.

Well, we can hardly blame Aniston for forgetting this scene, as the other kiss is far more iconic. That said, some of the FRIENDS stars didn’t remember many of the iconic scenes from the show, as seen during the Reunion episode. As Lisa Kudrow puts it, they mostly don’t watch the reruns because they find their performances awkward!

However, Jennifer and David did admit that they were crushing very hard while they were shooting for the first season. However, they never worked on the crush, and instead were just happy being friends and colleagues.

(The above story first appeared on Scoop Buddy on May 27, 2021 07:36 PM IST. For more news and updates on politics, world, sports, entertainment and lifestyle, log on to our website scoopbuddy.com).