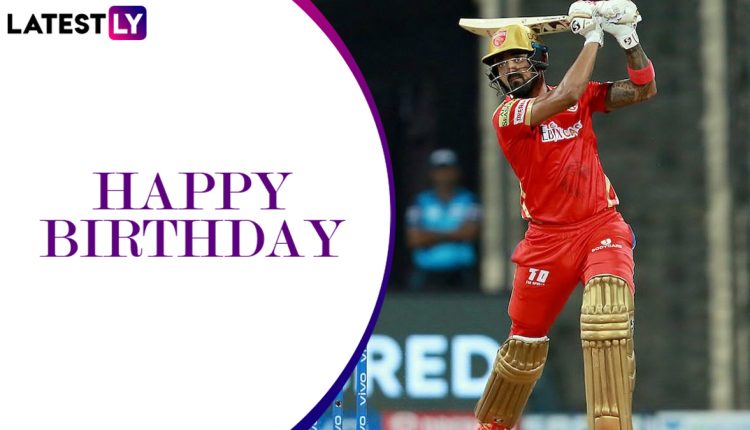 Punjab Kings captain KL Rahul turns 29 on Sunday (April 18), and birthday wishes are pouring in from all over the world. On the occasion, Yuvraj Singh, Shreyas Iyer and many other members of the cricket fraternity took to social media and extended greetings for the dasher. Born in 1990, Rahul’s cricket journey has been nothing short of incredible. The technically sound batsman was touted to become a Test specialist earlier in his career. However, the talismanic cricketer worked on his game and emerged as one of the most fearsome batsmen in limited-overs cricket. Rahul can score runs quickly with orthodox shots, and his knack of staying at the crease for long makes him an even greater asset. KL Rahul Completes 2000 Runs for Punjab Kings, Achieves Feat Against Rajasthan Royals.

While there are many swashbuckling batsmen in modern-day cricket, not many more versatile than Rahul. Despite being an opener majority of his career, the Bangalore batsman became the cornerstone of Team India’s middle-order is white-ball cricket. Be it playing anchor knocks or providing late impetus, Rahul rose to all the challenges which came his way. Moreover, he also became India’s designated wicket-keeper in ODIs and T20Is last year. Hence, there’s hardly anything that Rahul can’t do on a cricket field, and it would be exciting to see what more feats the dasher will achieve in time to come. As Rahul turns a year older, let’s look at how cricket stars wished him. IPL 2021 Points Table Updated.

Wish you a very Happy Birthday Brother @klrahul11 .. Lots of love to you & your family.. Stay safe & healthy 💪✌️ pic.twitter.com/KMCFnkcvxe

Here’s wishing @klrahul11 – one of the most stylish batsmen going around – a very happy birthday. 🎂👏 #TeamIndia

As he brings in his birthday, let’s relive his superb hundred against England 🎥 👇 https://t.co/y6ak9h5NjR pic.twitter.com/6twfICjQCU

Mirror mirror on the wall, we know he’s the 𝐊𝐋𝐚𝐬𝐬𝐢𝐞𝐬𝐭 of ’em all 🤩

Happy birthday buddy 🎉 Not on your side tonight though 😝 @klrahul11 pic.twitter.com/GedtH6YYw0

Wishing you a very Happy Birthday bud @klrahul11! Lots of love and blessings! All the best for IPL, take the team to the end 👊🏻

Meanwhile, the Birthday boy is currently leading Punjab Kings in the VIVO Indian Premier League (IPL) 2021. He has already set the tournament on fire with a match-winning 91 in the first game, and one can expect many such knocks from him. Rahul will take the field later in the evening for a clash against Rishabh Pant’s Capitals, and he’ll like to make the occasion more memorable by taking his side over the line.

(The above story first appeared on Scoop Buddy on Apr 18, 2021 01:48 PM IST. For more news and updates on politics, world, sports, entertainment and lifestyle, log on to our website scoopbuddy.com).

Sonu Nigam on Kumbh Mela 2021: As a Hindu, I Feel It Shouldn’t Have Taken Place Amid COVID-19 Pandemic