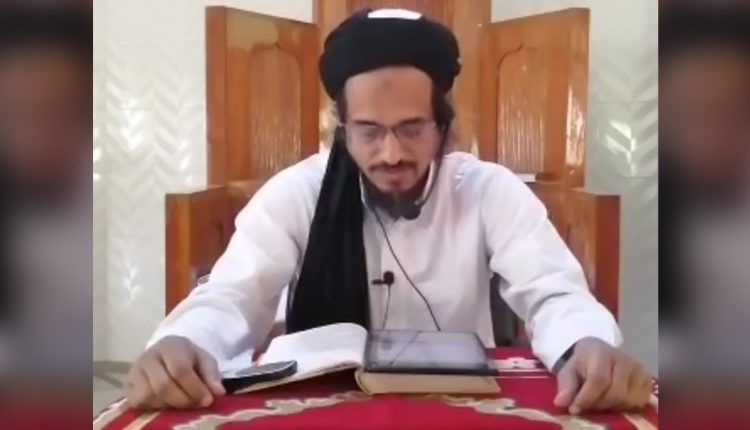 Dhaka, April 29: Harun Izhar, former education and cultural secretary of the abolished committee of the militant outfit Hefazat-e-Islam, was detained by the Rapid Action Battalion (RAB) early on Thursday from Lalkhan Bazar Madrasa in Chittagong.

Harun’s personal assistant has confirmed his detention. The leader also posted a ‘good bye’ message on his Facebook page on at 12.45 a.m. on Thursday.

In November 2009, Harun was arrested for allegedly planning an attack on the US embassy in Dhaka along with two other suspects. The other two, who were arrested in the US, had provided the information about Harun. They also said that they were planning attacks on various locations in different countries including a newspaper’s office in Denmark.

Harun is the son of Mufti Izharul, who was trained by the bodyguard of Osama Bin Laden in Afghanistan. Mufti Izhar was then the chief of the militant alliance Islami Oikya Jote and Bangladesh Nationalist Party (BNP).

The two others who were arrested then were linked to Pakistan-based terror outfit Lashkar-e-Taiba.

In December 15, 2010, the RAB had arrested Mufti Izharul over charges of involvement in militancy. Lt Col Sazzad RAB Chittagong the then Commanding Officer (CO) had said, “We have evidence and documents proving his involvement with Huji’s militancy.” But he was later released on bail. He was accused in several cases, including one under the Explosive Substance Act.

Izharul went into hiding after three people including two students were killed and several others injured in the explosion at the four-storey dormitory of Al Jamiatul Ulum Al Islamia Madrasa in Lalkhan Bazar of Chittagong on October 7, 2013. That time Mufti Harun was arrested from Raozan of Chittagong two days later but his father managed to evade arrest.

A Chittagong Court on 2012 issued an arrest warrant against Hefajat-e Islam’s then Nayeb-e-Ameer Mufti Izharul Islam in a case filed for not submitting his wealth statement before the Anti-Corruption Commission (ACC). Mufti Izharul has evaded arrest for over one and a half years.

Police later recovered huge explosive-making materials, four unexploded grenades from the surrounding areas of the madrasa and 18 bottles of acid after raiding the residence of Izhar on the night of the deadly bomb explosion.

Police than found traces of huge explosives, including more than 30 handmade grenades, had been stored in the room where the explosion took place.

Later, police filed three cases – one under Explosives Substance Act, another under Acid Act and the other for murder of the three people in which nine people were accused including Mufti Izhar, his son Mufti Harun, three other madrasa teachers and two students.

Harun and his father tried to pass it off as a laptop blast, but police recovered grenades, acid and huge amount of explosives during a raid on the madrasa after the blast. Izharul was also the chief of Nezam-e-Islam Party, another radical group.

(The above story first appeared on Scoop Buddy on Apr 29, 2021 01:50 PM IST. For more news and updates on politics, world, sports, entertainment and lifestyle, log on to our website scoopbuddy.com).

Joe Biden on US Economy: It’s time to grow US economy from bottom and middle; we’re in competition with China | International Business News

Can You Donate Plasma After Vaccination? Dos and Don’ts You Must Know Before Donating Plasma to COVID-19 Positive Patients