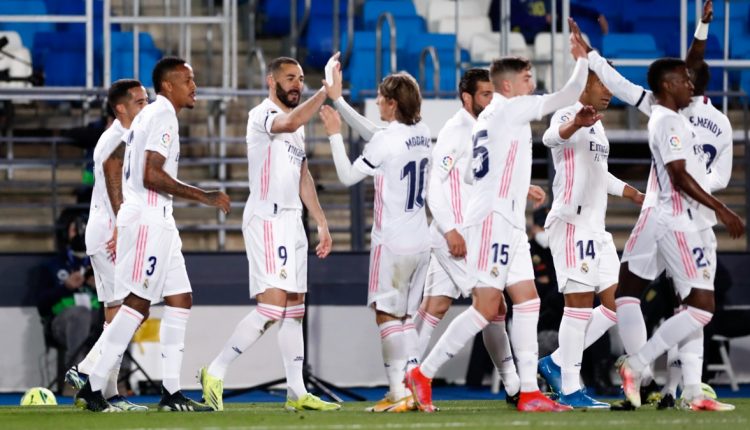 Chelsea and Real Madrid will cross swords in the second leg of the UEFA Champions League 2020-21 semi-finals. The knock-out encounter takes place at the Stamford Bridge on Thursday midnight (May 6). Both teams have been impressive lately and have a point to prove in this fixture. Real Madrid had quite an underwhelming season but they are now just a couple of steps away from winning both the La Liga title and the UEFA Champions League this year. On the other hand, Chelsea have been a resurgent force under German manager Thomas Tuchel and would back themselves to defeat the Los Blancos. Meanwhile, fans can scroll down to get the live streaming, live telecast and other RM vs CHE match details. Sergio Ramos, Fede Valverde & Ferland Mendy Included in Real Madrid’s 23-Member Squad For UCL 2021 Semi-Final Against Chelsea.

Notably, the first leg between the two clubs took place last month at the Estadio Alfredo Di Stefano and resulted in a 1-1 draw. Christian Pulisic stunned the reigning La Liga champions by opened the scoring in the 14th minute. However, Real Madrid settled the scores soon, with Karim Benzema finding the nets in the 29th minute. No more goals were in that fixture. Hence, the winner of this contest will meet Manchester City in the finals on May 29. As the game gets lined up, let’s focus on the streaming and further information. Will Eden Hazard Play Tonight in Chelsea vs Real Madrid, UCL 2020-21 Semi-Final Clash?

Chelsea vs Real Madrid match in the first leg of the UEFA Champions League 2020-21 semi-final will be played at Stamford Bridge in London. The match will be held on May 06, 2021 (Thursday) and it is scheduled to begin at 12:30 am IST (Indian Standard Time).

Fans in India looking for how to watch the Chelsea vs Real Madrid UEFA Champions League 2020-21 semi-final first leg can follow the live action on Sony Ten 2 and Sony Ten 2 HD channels on television. The free live streaming online of CHE vs RM match will be available on the SonyLiv app as well as on the website.

(The above story first appeared on Scoop Buddy on May 05, 2021 11:44 PM IST. For more news and updates on politics, world, sports, entertainment and lifestyle, log on to our website scoopbuddy.com).

34 of 126 Winning Candidates in Assam Have Declared Criminal Cases; Congress Tops the List