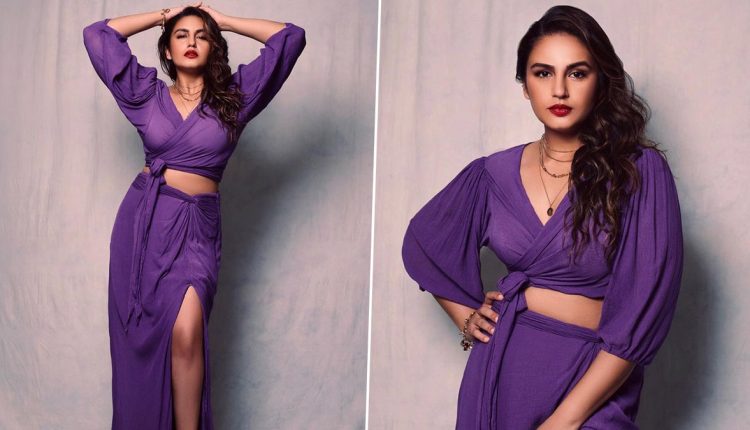 Huma Qureshi has started promoting her Hollywood release, Army of the Dead and the lady has picked stunning purple separates for the occasion. Huma’s stylist team took to their Instagram account to share pictures of her newest appearances and boy, did she look hot! Huma will be collaborating with Zac Snyder for this big release and going by its trailer, we can vouch for all the excitement that’s waiting for us ahead. Huma’s #ootd did strike a chord with us and we are amazed by her overall styling. Army Of The Dead: 5 Amazing Zombie Movies of the 21st Century to Check Out Before Zack Snyder’s Film on Netflix.

Huma’s outfit was all about a purple tie-up crop top paired with a matching skirt with a front slit. The outfit was sultry and Huma definitely added an extra oomph to it with her charisma. She paired her outfit with a chunky necklace and a bracelet and kept her makeup extremely minimal. A bold lip colour and sensuous eyes did the trick for her. Huma also kept her hairdo extremely sleek with loose, wavy wet hair that looked stunning as expected. Army of the Dead Review: Zack Snyder’s Zombie Heist Film, Starring Dave Bautista and Huma Qureshi, Is a Fun Ride, Say, Critics!

Huma Qureshi’s Army of the Dead is slated to release on May 21 on Netflix and we can’t be more excited for that. It revolves around a group of soldiers who are hired to plan a casino heist amid a zombie attack in Las Vegas.

(The above story first appeared on Scoop Buddy on May 21, 2021 11:00 AM IST. For more news and updates on politics, world, sports, entertainment and lifestyle, log on to our website scoopbuddy.com).