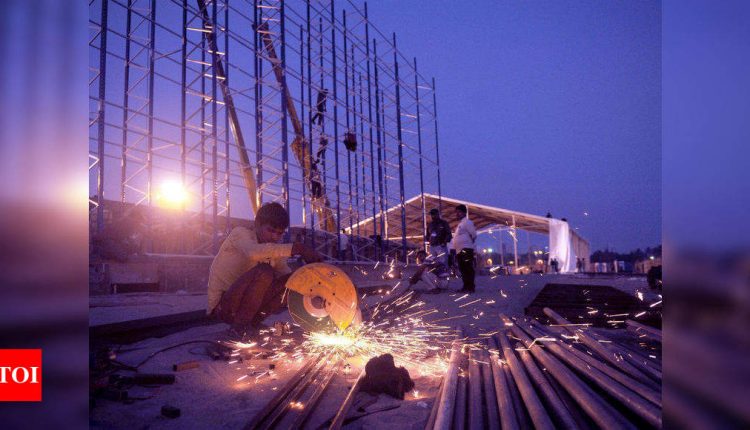 MUMBAI: India Ratings and Research on Friday revised down India’s FY22 real GDP growth forecast to 10.1 per cent, from earlier projection of 10.4 per cent, citing the second wave of Covid-19 infections and slower pace of vaccination.
At a time when large parts of the country are experiencing tremendous pressure on medical infrastructure, the agency said it expects the second wave to start subsiding by mid-May.
Coronavirus: Live updates
Earlier this month, the Reserve Bank maintained its 10.5 per cent GDP growth estimate, but governor Shaktikanta Das has flagged the rising cases as the biggest impediment to recovery.
Other brokerages and analysts have also been revising down their forecasts in the light of the second wave.
The economy is estimated to have contracted by 7.6 per cent in FY21.
India Ratings said the impact of the second wave will not be as disruptive as the first one, despite the daily case load touching three times of the first wave’s peak, as lockdowns are set to be localised ones.
“Unlike the first wave, the administrative response is not abrupt, and is unfolding gradually in a graded manner.
“Also, households, businesses and other economic agents are better prepared and there is a significant amount of learning by doing, which can help them withstand and navigate through the second wave of Covid-19 crisis,” the rating agency added.
Additionally, the vaccine will also enhance safety and reduce the fear element among the vaccinated economic agents, it said.
Over 132 million vaccine doses have been administered as of April 21, the agency said, estimating that 1,768 million doses will be required, after the government announced that the jabs will be open for all adults from May 1.
The vaccination efforts will cost 0.12 per cent of the GDP to the union government and 0.24 per cent to the state governments, it said, adding that both vaccination production and the pace of vaccination are key in controlling the rising case load and for economic growth.
“Ind-Ra has, therefore, revised its GDP growth forecast for FY22 to 10.1 per cent from earlier forecasted 10.4 per cent,” it said.
The demand-side component of GDP namely private final consumption expenditure, government final consumption expenditure and gross fixed capital formation are now expected to grow at 11.8 per cent, 11.0 per cent and 9.2 per cent, respectively, in FY22, as against the earlier forecast of 11.2 per cent, 11.3 per cent and 9.4 per cent, respectively, it said.
Rural demand is likely to remain resilient in view of good Rabi harvest and the prospects of a near normal monsoon forecast for 2021 by the India Meteorological Department, it said.
Although urban demand is still recovering and may get adversely impacted by the second wave of Covid-19 infections, the demand from contact-intensive sectors is likely to strengthen due to the ongoing vaccination drive, it said.
The agency, however, said that more than growth, it is inflation where “worrying signs” are emerging, and noted that higher inflation not accompanied by a commensurate increase in wage growth could mean lower disposable income/consumption demand, which in turn could adversely impact the private corporate investment revival in the economy.
It expects retail and wholesale inflation to average 5.0 per cent and 5.9 per cent, respectively, in FY22.
The fiscal deficit target of 6.8 per cent is achievable, but hinges on the successes on divestment, the rating agency said.
After a surplus in FY21, the current account is expected to slip back into deficit in FY22, and the gap was estimated at 0.4 per cent by the agency.