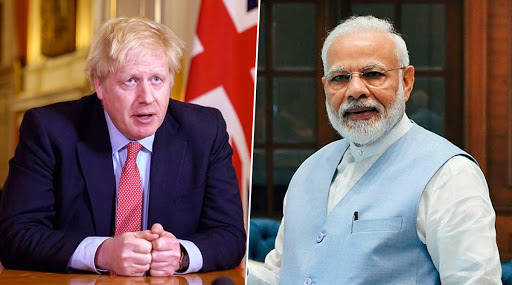 New Delhi, May 4: The issue of extradition of Vijay Mallya and Nirav Modi figured in a virtual summit between India and the UK on Tuesday, with Prime Minister Narendra Modi asserting that economic offenders should be sent back to the country at the earliest for trial.

India has been pressing the United Kingdom to extradite Mallya and Modi to face trial in India for their alleged involvement in cases relating to financial fraud. At a media briefing, Joint Secretary in the Europe West division in the Ministry of External Affairs (MEA) Sandeep Chakravorty said British Prime Minister Boris Johnson has mentioned that the authorities in the UK will do whatever possible to make sure that the economic offenders are extradited.

“They discussed the extradition of economic offenders and the prime minister (Modi) said such offenders should be sent back to India at the earliest for trial,” Chakravorty said. S Jaishankar Meets UK Home Secretary Priti Patel, Signs Migration and Mobility Partnership Agreement.

“Prime Minister Johnson said he faces some legal hurdles because of the nature of the criminal justice system in the UK, but he is aware of it and they will do whatever is possible to make sure that these people are extradited at the earliest,” he added.

The joint secretary was replying to a question on the issue. Mallya has been based in the UK since March 2016 and remains on bail on an extradition warrant executed three years ago by Scotland Yard. In May last year, the fugitive businessman lost his appeals in the British Supreme Court against his extradition to India to face money-laundering and fraud charges.

Subsequently, India urged the UK not to consider any request for asylum from Mallya as there appeared to be no ground for his persecution in the country.

In February, the Westminster Magistrates’ Court had concluded that the fugitive diamond merchant has a case to answer before the Indian courts.

To a separate question on whether the UK asked India to take back the Indians who are staying in that country illegally, Chakravorty referred to the migration and mobility partnership inked by the two countries on Tuesday.

He said India is against illegal migration as it “prejudices legal migration” and indicated that it will take back those who were not given nationality or resident permits.

“It is our solemn duty. Indian nationals who are undocumented or are in distress abroad and are not being given nationality or resident permits have to be taken back and I think we will do that.

“I think this agreement systematises that but more than that, it creates opportunities for legal migration and I think that is the aspect we would like to focus on. We would be very much keen to see that the numbers that have been offered by the UK are increased in the future and a large number of Indian professionals find opportunities in the UK,” the joint secretary added.