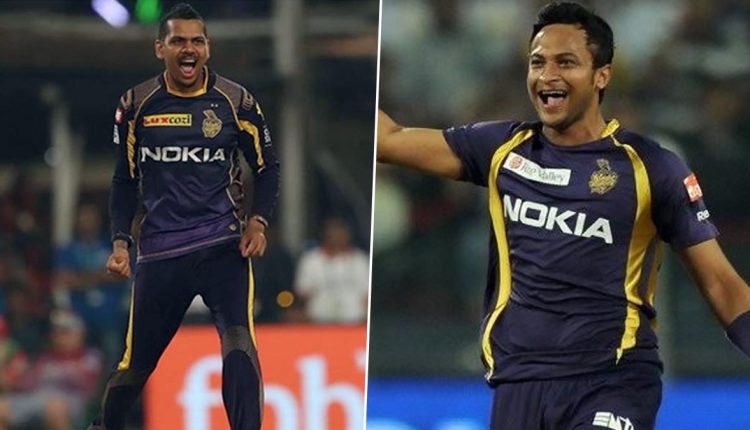 With just one win in the first three games, Kolkata Knight Riders (KKR) haven’t made a sensational start to the Indian Premier League (IPL) 2021, and they’ll like to get back in the winning ways soon. Their last assignment resulted in a 38-run loss against Royal Challengers Bangalore (RCB), and it would be interesting to see how the two-time champions bounce back. Eoin Morgan’s men will next face MS Dhoni’s Chennai Super Kings (CSK) at the Wankhede Stadium in Mumbai on Wednesday (April 21). Coming off two back-to-back defeats, KKR are expected to make some major changes in the line-up, and one can see Sunil Narine getting back in the scheme of things. KKR vs CSK Preview: Likely Playing XIs, Key Battles, Head to Head and Other Things You Need To Know About VIVO IPL 2021 Match 15.

Narine, who has been KKR’s leading bowler ever since joining the franchise in 2012, has warmed the benches so far in the season. Last year, the veteran off-spinner faced some fitness issues, and his bowling action also came under the scanner. Hence, the team management opted for Shakib Al Hasan as their first-choice spin-bowling all-rounder, but the Bangladesh star is yet to deliver. IPL 2021 Points Table Updated.

So far, Shakib scored 38 runs in three games alongside taking two wickets at an economy rate of over eight. Although IPL 2021 is still in its initial stage, the team management might be tempted to include Narine to change their fortunes. Even KKR head coach Brendon McCullum also hinted at Narine’s comeback for the CSK clash.

“Sunil Narine stood on the rope before our first game, which means he has had an injury where he was not 100 percent fit. He certainly comes into our calculations, he was touch and go for this game against RCB but we opted for Shakib who has been good for us and he gives us an extra bit of batting,” said McCullum in the post-match conference.

“After three games, the guys have played well, we have not got the results, we probably will need some fresh legs for slightly different wickets in Mumbai. We probably expect to make one or two changes in our next game, but overall I think, we have shown we have a good chance in this tournament if we tidy up,” he added.

It’s quite evident that KKR will take the field against CSK with some major changes and Narine’s inclusion in highly likely. With multiple left-handers like Sam Curran, Ravindra Jadeja and Moeen Ali in the CSK middle-order, Narine would undoubtedly be a potent weapon but unleashing his A-game out would be a challenge for him.

(The above story first appeared on Scoop Buddy on Apr 21, 2021 10:26 AM IST. For more news and updates on politics, world, sports, entertainment and lifestyle, log on to our website scoopbuddy.com).

Robbie Amell Birthday: 5 Movies of the Canadian Actor that You Must Watch!