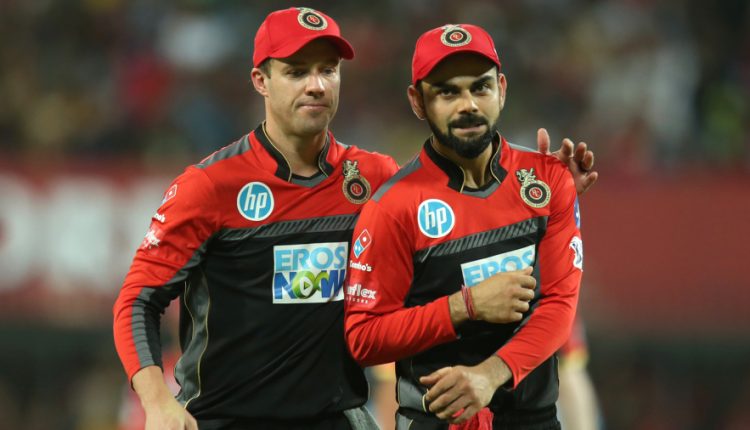 Body language, and putting on an act were among the “four points” AB de Villiers discussed with Virat Kohli when the Indian captain made a “special call” after the second T20I against England in Ahmedabad, where he helped India chase down a target with an unbeaten 73. Kohli made the call because of a “lack of clarity” in his mind, having struggled for fluency during the preceding four-Test series, when he scored just two half-centuries.

“I mentioned four points,” de Villiers revealed during an interview with the Royal Challengers Bangalore website. “We spoke a couple of things away from the game and then also a couple of technical things, but it was very basic. I have been wanting to tell him for quite a while because I was watching him for a few months and it looked like he was quite intense at the crease, with his whole game. So I really wasn’t surprised when I saw the message [from Kohli] and I knew immediately all he needs to do is the basic stuff.”

And what were those basics? “See the ball. Still head. Allow the ball to come into your space. Body language and attitude,” de Villiers said. “And I sort of elaborated around those four points. But basics, yeah. Those are the kind of little things you forget. It seems so simple. But when you are struggling to find your rhythm, your momentum, you really forget things like keep my head still, allow the ball to come into my space.

“Also, you got to act a bit. You got to walk out there, chest out, ready to punch the guys, and before you know, you are really in the mix of things, enjoying your innings.”

Kohli has not scored a Test century since November 2019. Although he has reiterated his priority of trying to help his team win, Kohli himself pointed out in a separate chat with the franchise that “doubts” were creeping into his mind and that is when he felt he needed to have a chat with de Villiers.

‘When in doubt, what do you do?

“It’s amazing, When you’ve played for so long, you can go into a zone where you feel you can’t even score a run,” Kohli said. “And there is such a lack of clarity in your mind, just too many thoughts going on. There’s literally nothing inside of you that’s creating any fear, it’s all external factors you’re thinking of – what if this happens, what if that happens? And that’s just creating more and more confusion.

“So, I thought I will just take another perspective or another point of view because I’ve seen AB play, and every innings he’s got that same intensity, same passion and same commitment. And he’s never addicted to getting scores, he’s always thinking about the team situation. So I asked him a question: “when in doubt, what do you do?” And he gave the simplest of advice one can get: ‘just watch the ball and everything else will be fine’. So I went to the game and started watching the ball.”

“See the ball. Still head. Allow the ball to come into your space. Body language and attitude. And I, sort of, elaborated around those four points”

Having started the white ball segment of the England series – comprising five T20Is and three ODIs – with a duck, Kohli finished with five half-centuries as he led India to victories in both the series.

Kohli spoke about how the demands of his multiple roles were beginning to distract him, which was then affecting his mindset on the field. “When you have so many expectations from yourself, having done that for 12-13 years at the same level and when things are not happening as well, you start searching for answers, you start becoming more desperate,” he said. “And then you lose out on the enjoyment of the game. You end up performing well because you never focused on the performances. You focused on the joy and the process.

The chat with de Villiers helped Kohli realise the joy of playing the game at the highest level, all over again.

“And you don’t expect anyone else to understand, to be very honest. You have to make that decision: to hell with everything, I’m going to go out there, I am going to hit that cricket, to hell with the repercussions,” Kohli said. “Whatever happens, happens. I am just going to go out there and enjoy the game first because before I played for India, before I became the captain, I started playing this game for a reason. And if I go away from that reason, things are going to get more and more tough.”

DoT gets Rs 2,307 crore from Jio, Airtel by assigning some spectrum immediately, instead of later

iQOO 7 series to be available via Amazon in India, confirms company

Tesla’s Cybertruck Will Be Waterproof Enough To Serve Briefly As Boat, Says CEO…