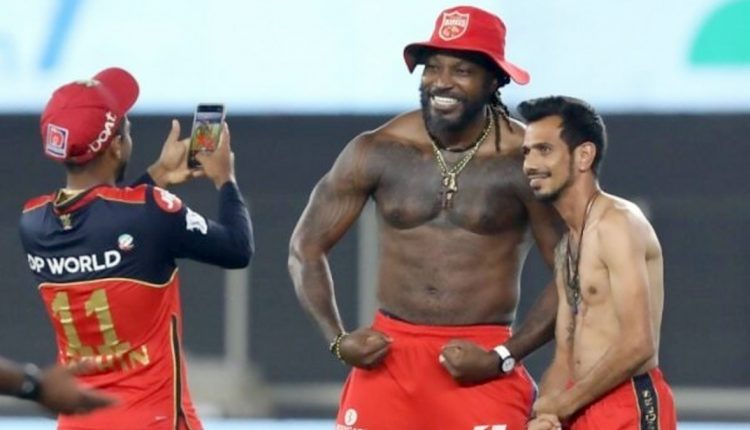 Punjab Kings had a memorable outing against Royal Challengers Bangalore as they dominated Virat Kohli’s men in all three departments and registered a thumping 34-run win. Batting first at the Narendra Modi Cricket Stadium in Ahmedabad, PBKS posted 179/5, with skipper KL Rahul scoring 91 while Harpreet Brar (25) and Chris Gayle (46) playing crucial cameos. In reply, RCB lost wickets at regular intervals and never really looked in the hunt. Spin twins Ravi Bishnoi and Harpreet ran through Bangalore’s batting order as RCB were restricted 145/8, suffering their second defeat of the season. IPL 2021: Harpreet Brar Gets Pat on Back from Virat Kohli After PBKS All-Rounder’s Match-Winning Performance Against RCB (Watch Video).

While Virat Kohli’s wouldn’t have been satisfied with their performance, Punjab Kings’ Twitter account added salt to their wounds. After the game, the franchise shared a snap where Sachin Baby was seen, clicking a picture of Chris Gayle and Yuzvendra Chahal, who were posing shirtless. “If we have to summarize #PBKSvRCB,” read the caption of the snap. Chris Gayle, Yuzvendra Chahal Pose Shirtless, Flex Their Muscles After PBKS vs RCB Match in IPL 2021.

Meanwhile, this was Punjab’s third successive win over RCB in IPL, and they must have gained a lot of confidence with their recent performance. However, KL Rahul’s men must not be complacent as this was their third win in seven games. Hence, they need to win at least five of their remaining five games to qualify for the playoffs without any hassle.

On the other hand, RCB don’t have much to worry about as they are comfortably placed in third place with five wins in seven outings. However, history has seen Virat Kohli’s side losing momentum after a good start, and they would like to avoid any drama in IPL 2021.

(The above story first appeared on Scoop Buddy on May 01, 2021 08:06 PM IST. For more news and updates on politics, world, sports, entertainment and lifestyle, log on to our website scoopbuddy.com).

Stage Set for Counting of Votes with Strict Covid-19 Protocols