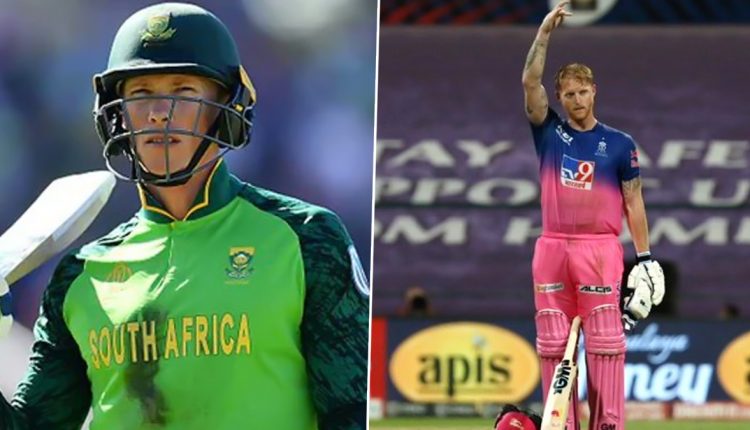 While the VIVO Indian Premier League (IPL) 2021 is still in its initial half, Rajasthan Royals have already suffered multiple major blows. Ben Stokes and Jofra Archer have been ruled out of the season due to injuries, while Liam Livingstone pulled out of the tournament, citing bio-bubble fatigue. As a result, the Men in Pink lost three of their first four games and are reeling at last place in the team standings. With so many big guns gone, the Jaipur-based franchise would be looking for potent replacements, but they are yet to put a stamp on any new signing. Jofra Archer Injury Update: Rajasthan Royals Speedster Ruled Out of IPL 2021, Confirms ECB.

However, if reports are to be believed, South Africa batsman Rassie van der Dussen is likely to join the Royals for the rest of the IPL season. While the talks between the two parties are still on, the final call on Dussen’s selection will be taken after the Proteas will clear the fitness test. Netwerk24 reported that the fitness test would take place on Monday, and if it all goes well, the dasher can join Rajasthan Royals.

Notably, Van der Dussen has been a cornerstone of the Proteas team across formats ever since making his international debut in 2019. However, his recent performances in T20Is have been nothing but jaw-dropping. He, in total, has scored 628 runs in 20 games at an average of over 41 and a strike rate close to 140. Moreover, Dussen’s ability to play spin well can make him an excellent asset for the Men in Pink.

With Stokes and Livingstone gone, Van der Dussen, in case he joins Royals, will partner his compatriot David Miller in the middle-order. Meanwhile, RR will next meet Kolkata Knight Riders at the Wankhede Stadium in Mumbai on Saturday (April 24).

(The above story first appeared on Scoop Buddy on Apr 23, 2021 08:30 PM IST. For more news and updates on politics, world, sports, entertainment and lifestyle, log on to our website scoopbuddy.com).