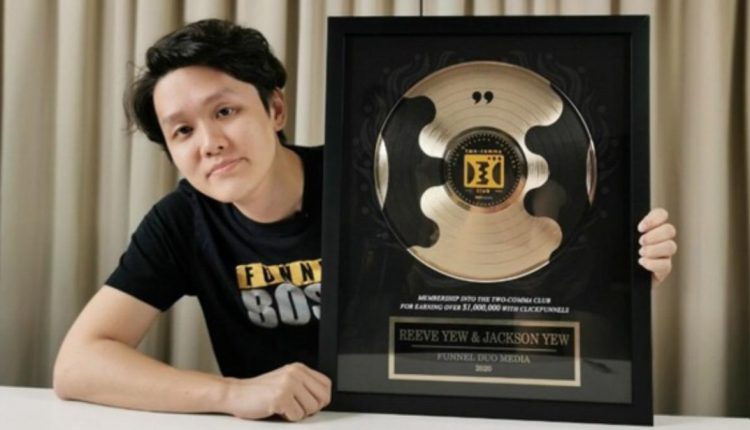 Jackson Yew: From the Brink of Bankruptcy to Co-Founding Funnel Duo Media

It’s not often that you hear entrepreneurs wrapping up their company in under two years. But Jackson Yew, the co-founder of Funnel Duo Media, had to take that hard decision with his former business partner because of unavoidable circumstances.

According to Jackson, the key to success is planning, managing, and executing your plans flawlessly. Sure, you will come across roadblocks, but you need to find a way to get past them to fulfill your dreams. Jackson’s new company, Funnel Duo Media, now makes seven figures in revenue consistently. How did he turn around things? You will feel inspired once you read his story.

Jackson comes from a humble household where his parents made just enough to feed everyone adequately. Although he wanted toys like any other kid of his age, his parents couldn’t afford too many. Every year, Jackson would promise himself that one day, he will make more than enough money that he and his family won’t have to prevent themselves from buying anything just because it is expensive.

Jackson soon finished college and got an engineering degree. He loved mechanical engineering and even got a scholarship to pursue his Master’s degree in Taiwan.

The then 24-year old got his first job as a Sales Engineer in a palm oil machine company in Malaysia. Jackson had to frequently drive around Malaysia to inspect different machines at various locations. His job also involved counting cash. But the job wasn’t satisfying him at all. He wanted to do something he loved.

Growing up, he dreamed of becoming an entrepreneur. That passion soon took over, and he eventually quit his job after a couple of years.

The first stint as an entrepreneur

Jackson achieved his dream of becoming an entrepreneur when he partnered with one of his ex-colleagues to start a ship salvaging company. The company was flying in the first six months, and the duo was making enormous profits.

But one year later, Jackson and his partner started having disagreements with internal affairs. The mismanagement led to a point where they began experiencing financial troubles. They eventually had to shut down the company after two years because they couldn’t bear the financial losses.

What followed was the most challenging time in Jackson’s career. He didn’t have money to buy food or pay rent. A few days later, he went home and started offering web design and website solution services to clients from Australia, Canada, the USA, and the UK. His foreign clients helped him make double each month with their projects.

Partnering with his brother

Jackson was skeptical about partnering with ex-colleagues. He wanted to start a business with someone he could trust blindly. That was the same time when his brother, Reeve Yew, was also struggling to make a name for himself. Together, they decided to go all-in and start their digital agency called Funnel Duo Media. Their company now offers marketing strategies, business consultation, and coaching. It wasn’t long before they started making seven figures in revenue. They even won the Two-Comma Club three times in a single year.

Jackson’s career is proof that no matter what challenges life throws at you, you can overcome them, provided you stay honest and keep working hard.