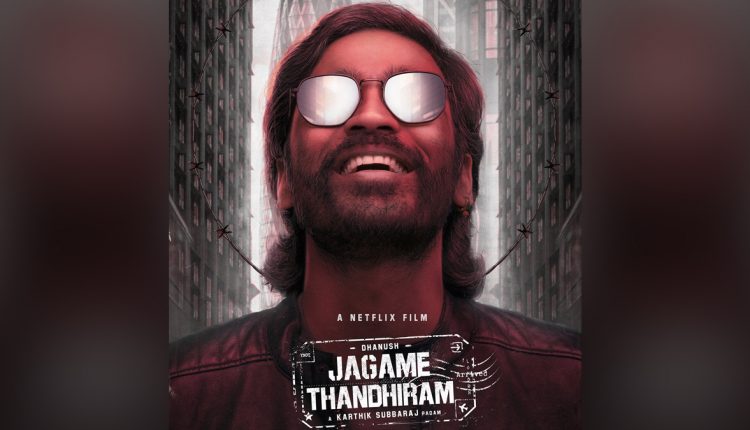 Jagame Thandhiram: Everything We Know About Dhanush’s Film So Far

South star Dhanush has several exciting projects up his sleeves. The actor, who still basking in the glory of the successful release of Karnan, has swiftly even moved on to work on his next project. The actor has been spending his time with the cast and crew of The Gray Man in California, and is reported to soon kickstart the shoot for the film. Jagame Thandhiram Teaser: Makers Introduce Dhanush As Suruli, ‘The Most Dangerous, Notorious Gangster’.

While the actor is busy shooting for one project, another project of his is up for release. Dhanush’s upcoming film Jagame Thandhiram is all set to entertain the fans. The film has a lot of anticipation attached to it and here is everything we know about the film.

Apart from Dhanush, the film also stars Aishwarya Lekshmi, Kalaiyarasan, Joju George and Scottish actor James Cosmo in key roles. James is marking his debut in the Indian film industry with this film. The music is composed by Santhosh Narayanan. The film is directed by Karthik Subbaraj and backed by YNOT Studios and Reliance Entertainment.

The film revolves around its main character Suruli who is a nomadic gangster. He has to choose between good and evil in a war for what one can truly call home. Subbaraj said Jagame Thandhiram is his dream project and he has made it with all heart. “The film is made with the ambition of telling a gripping story about a globally prevalent issue through a locally rooted character in a most interesting and entertaining way,” Subbaraj said in a statement.

Where and When To Watch The Film:

The film will premiere on Netflix and will be available for subscribers to watch from June 18. Revealing the poster and announcing the release date, Netflix shared, “Suruli oda aatatha paaka naanga ready! Neenga ready ah? #JagameThandhiram coming on 18th June.” The film will release across 190 countries on Netflix. Jagame Thandhiram: Dhanush’s Action Thriller To Release On Netflix!

Apart from this, Dhanush will also be seen in Atrangi Re. Directed by Aanand L Rai, the film also stars Sara Ali Khan and Akshay Kumar in the lead roles. The actor is also working with his brother Selvaraghavan on Naane Varuven, and will work with Karthik Naren for an untitled project.

(The above story first appeared on Scoop Buddy on Apr 30, 2021 09:57 PM IST. For more news and updates on politics, world, sports, entertainment and lifestyle, log on to our website scoopbuddy.com).