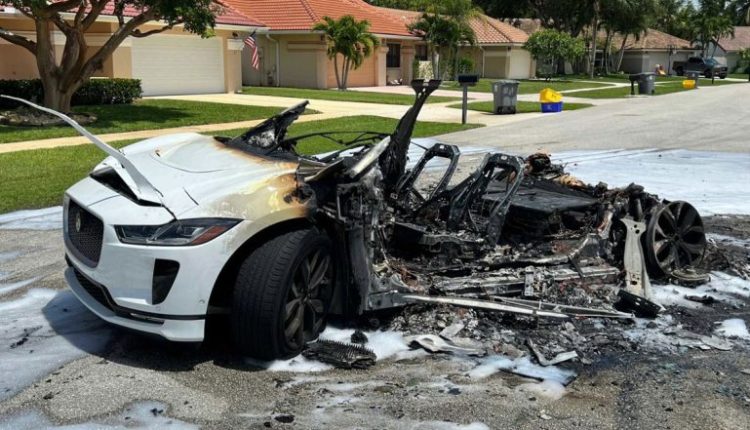 San Francisco: A Jaguar I-Pace electric car caught fire while being charged at a garage in the US — the fourth such battery fire in the I-Pace series (that costs upwards of Rs 1 crore), which is Jaguar’s first and only all-electric vehicle. According to Electrek, Jaguar uses LG battery cells like the Bolt EV and Kona EV, which were both recalled for battery fire risks recently. The latest battery fire was reported by Jaguar I-Pace owner Gonzalo Salazar in the state of Florida. Jaguar Land Rover Collaborates With Nvidia To Develop Software for SUVs.

“On June 16, I plugged the car in before going to bed. In the morning of June 17, I woke up and unplugged the car. Later that morning, I set out to run some errands. I drove about 12 miles that morning before returning back home and parking the car back in the garage, leaving the garage door open. As I was doing things at home, I heard pops coming from the garage,” he told Electrek.

“I decided to go see where the sounds were coming from, and upon walking into the garage, I faced a thick wall of smoke,” he added. “The fire department showed up and poured flame retardant foam on the vehicle until the fire was extinguished,” said Salazar, adding that “there was debris flying everywhere so I kept my distance”.

He then called 911 for help, as the car got engulfed in flames rapidly. Chevy and Hyundai — which also used LG Chem cells in the Kona EV — had made massive recalls in the past. In the case of the Jaguar I-Pace, the automaker also uses LG pouch battery cells in its electric vehicle. In 2018, an I-Pace caught fire while it was parked in a driveway in the Netherlands.

(The above story first appeared on Scoop Buddy on Aug 03, 2022 09:27 AM IST. For more news and updates on politics, world, sports, entertainment and lifestyle, log on to our website scoopbuddy.com).