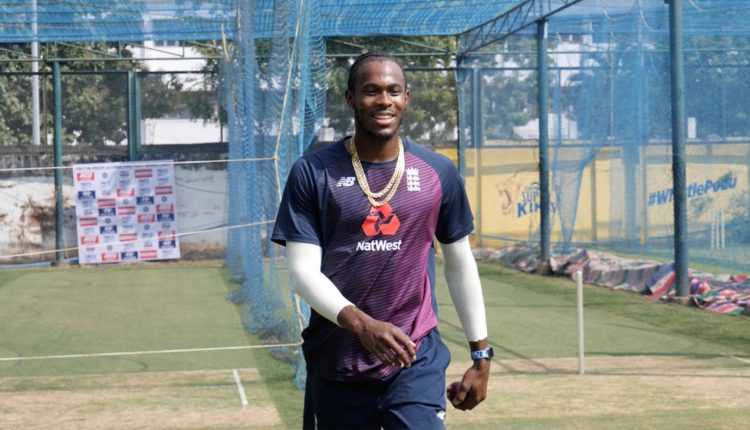 ‘I’m very confident we’ll get him back, and get him back as we’ve seen Jofra in the past,’ Giles says

Ashley Giles, the ECB’s director of men’s cricket, says that England are prepared to play the long game when it comes to Jofra Archer’s fitness, after the bowler himself indicated in a newspaper column that he is prepared to write off the home summer in a bid to recover fully from his recent elbow operation.

Writing in the Daily Mail on Thursday, Archer warned that if he didn’t get his rehabilitation right, he wouldn’t be able to play “any cricket … period”, after opting for surgery on his right elbow in the wake of his aborted return to action for Sussex in the County Championship earlier this month.

And having stated that his personal goals were England’s twin peaks of the T20 World Cup, in October and November, closely followed by the Ashes in Australia in December and January, Archer warned that he would be “quite prepared” to miss the five-Test series against India, beginning at Trent Bridge on August 4, if it meant he would be better placed to prolong his career across all three formats.

Asked if England were already planning for a summer without Archer in their ranks, Giles – speaking at the launch of IG as the new official partner of England Cricket – admitted that they would have to be “conservative” as he works his way back towards full fitness. However, he believed it was too soon to dismiss the prospect of him playing any part in the series.

“Not yet,” Giles said. “I’ve talked a lot about our objectives in the T20 World Cup and the Ashes and we need to make sure he is best prepared for that. If it went swimmingly, we may see him earlier but we’re not going to put any deadlines on it.”

“I’m very confident we’ll get him back, and get him back as we’ve seen Jofra in the past,” Giles added. “The surgery went well and if he recovers in the right amount of time, he’ll be relieved, almost, that the shackles are off and he can come back and do what he loves doing.”

Aside from confirming that Archer had undergone a procedure and that he would be assessed in four weeks’ time, the ECB has released limited details about the exact nature of Archer’s elbow problem. Giles, however, was confident that the operation had gone “very well”, but reiterated that he was not qualified to comment on the medical aspects of his treatment.

“All of these injuries carry a certain amount of risk, that’s why we look at all the conservative options first before you head into surgery,” Giles said. “But I’m very confident with the medical team we have and the surgery he’s had, which has gone very well, that Jof will be back and firing.

“Any of us who’ve had surgeries of those sorts in the past, they definitely make you edgy and nervous. But we’re definitely confident he’ll be back and ready to go at some point later in the year.

“Every player is different. I think the thing that has been holding Jofra back is that he’s had two different injuries in that elbow and it stops him doing what he does incredibly well – which is bowl quick. That must be frustrating for him. But the most important thing is that we look after and care for his injury and him. So his well-being is very important.”

Asked if the ECB would support the notion of Archer returning to his home island of Barbados during his rehabilitation process, Giles said that the board could be open to such a proposal if it fitted with the timeframes for his recovery.

“The world is ever-changing and that’s something we have to consider,” he said. “If there was an opportunity to go back at some point [to Barbados], perhaps we should support it. But the most important thing for him and us is to make sure he has the right care and rehabilitation on that elbow.”

IG are an Official Partner of England Cricket. For more information, visit IG.com/uk/england