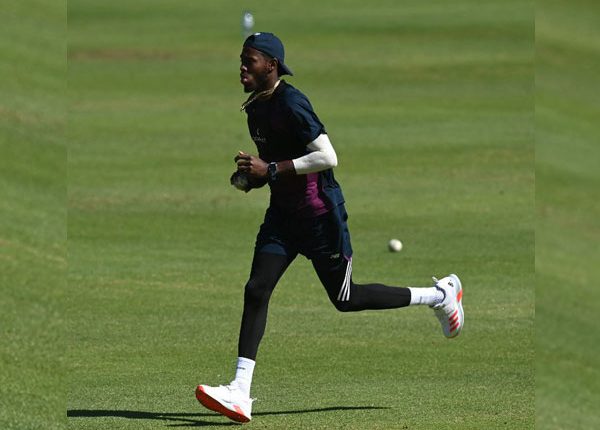 London [UK], April 23: England and Wales Cricket Board (ECB) on Friday informed that pacer Jofra Archer will miss the ongoing 14th edition of the Indian Premier League (IPL). Archer plays for Rajasthan Royals and was initially expected to miss the first half of the IPL due to the injury. “The England and Wales Cricket Board (ECB) has confirmed that England and Sussex bowler Jofra Archer will not play in the 2021 Indian Premier League,” ECB said in a statement. Archer will return to full training with Sussex from next week. Rajasthan Royals Pacer Jofra Archer Ruled Out of IPL 2021, Confirm ECB.

“Archer returned to bowling this week with higher intensity, and the ECB and Sussex medical teams will continue to monitor his progress. Archer will now step up his training regime starting next week and will be in full training with Sussex. It is expected that he will return to cricket in the next fortnight if he can continue to bowl and prepare pain-free,” it added.

Earlier, the pacer was given the clearance by his consultant to resume training as his right hand continued to heal following an operation on March 29. “It is hoped that he will be able to up his intensity with his bowling from next week. A further update on his elbow injury will be provided once he has returned to bowling to assess the effectiveness of his recent injection,” ECB had said in an official statement. “No decision has been made as yet on when Archer is due to return to play,” it had added.

An update on @Jofraarcher‘s fitness 👇

Archer had suffered a cut to his hand while cleaning at his home in January shortly before flying to India to prepare for the Test series. The ECB’s medical team managed the injury throughout the tour, and it did not impact his availability. A fragment of glass was removed during the operation to his middle finger on his right hand in March. Archer had played two Tests and all the five T20Is against India, and then he was ruled out from the ODI series and the first half of the IPL.

Royals suffered a double blow as all-rounder Ben Stokes also left the bubble to head back home to undergo surgery on his injured finger. Stokes was ruled out of the remainder of the IPL due to a finger injury. He has been sidelined for up to three months, the England and Wales Cricket Board (ECB) had confirmed.

(The above story first appeared on Scoop Buddy on Apr 23, 2021 07:10 PM IST. For more news and updates on politics, world, sports, entertainment and lifestyle, log on to our website scoopbuddy.com).

Kartik Aaryan Posts First Picture After ‘Dostana 2’ Controversy, Fans Are Excited To See Him Back on Social Media