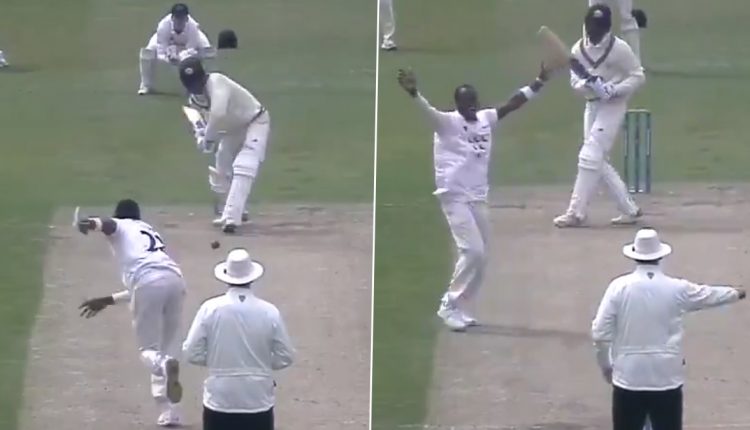 Jofra Archer has made an impressive return to the game, and this is great news for English cricket. Playing for Sussex 2nd XI, the 26-year-old featured in a match against Surrey 2nd XI in the ongoing Second Eleven Championship. Despite being out of action for a while, Archer was lethal as he troubled opposition batters by making the red cherry talk. He picked up two wickets to put his side on the driver’s seat. Although his pace wasn’t sky high as usual, his ability to move the ball was enough to get wickets. Jofra Archer Injury Update: England Speedster Shines with Bat on Return.

Picking his first wicket in the match, Archer impressed one and all as he dismissed Surrey middle-order batsman NMJ Reifer with a ‘banana’ delivery. It was a stunning inswinger that left the batsman clueless and smashed the pads. The umpire was impressed with Archer’s LBW appeal, and he raised his finger. Sussex Cricket’s official Twitter account shared the video of the same. “Not a bad delivery! Two wickets for @JofraArcher  against Surrey’s second XI yesterday, including this one,” read the caption. Have a look!

Not a bad delivery! 😅

Two wickets for @JofraArcher against Surrey’s second XI yesterday, including this one… ☄️ pic.twitter.com/vBc5s09l4B

For the unversed, Archer had sustained an unfortunate injury by accidentally dropping a fish tank and subsequently cutting his middle finger in the right hand. The wound forced him to miss the ODI series against India and also the Indian Premier League (IPL) 2021, where he would have represented Rajasthan Royals. Nevertheless, the tournament got postponed midway after multiple COVID-19 cases inside the bio-secure bubble.

However, Archer is back in 22 yards, and he could be named in England’s squad for the two-match Test series against New Zealand next month. With Kane Williamson’s men doing exceptionally well in Test cricket lately, the Three Lions would like to name a full-strength team, and a fit Jofra Archer should indeed walk in.

(The above story first appeared on Scoop Buddy on May 09, 2021 09:17 PM IST. For more news and updates on politics, world, sports, entertainment and lifestyle, log on to our website scoopbuddy.com).